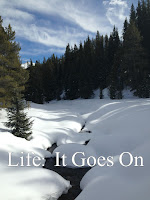 After three weeks flying solo, The Big Guy is finally home. He was home five whole minutes before we were out the door because he needed to socialize with friends and only a couple of hours longer before we just started watching 2-20 minutes snippets of things on television trying to find something to watch. My neat and tidy home is already back to having towels hung up willy-nilly, blankets just tossed over a chair, and "stuff" everywhere. I'm not saying I didn't miss him but I do already miss the quiet!

Listened To: I finally finished Africaville and started Ruth Reichl's Save Me The Plums. Reichl is reading it and I am really enjoying it.

Watched: While BG was gone, when the television's been on, it's been on with a purpose. I watched a season of Britain's Interior Design Masters, half of the final season of Orange Is The New Black, and the rest of season 2 of The Marvelous Mrs. Maisel. This weekend BG and I watched Nicholas Nickleby which starred Charlie Hunnam (Sons of Anarchy) and featured so many other well-known names.

Read: I finished The Starless Sea and started Michelle McNamara's I'll Be Gone In the Dark. Because I couldn't read a book about a serial killer when I was home alone in the evenings, I switched that up with more of Leslie Jamison's Make It Scream, Make It Burn. I had gotten of gotten bogged down on that one but it's picked back up again for me.

Made: Spaghetti pie, an updated version of tater tot casserole (even made my own cream of mushroom sauce instead of using a can of soup), and oatmeal butterscotch cookies.

Enjoyed: Lots of time with Miss H, just the two of us. Because she doesn't get home from work until late evening, we often ended up staying up until midnight talking and laughing. Not that we don't spend a lot of time doing those things when BG is home but we amped it up while he was gone.

Planning: It's been too cold to spend much time in the basement the past couple of weeks (our basement is carpeted but doesn't have finished walls so it gets cold down there). This week is supposed to be warmer so I should be able to get back to my reorganizing down there.

Thinking About: Putting away my snowmen for the year because I'm already over winter after spending some part of every day for a week shoveling snow or scraping off ice.

Feeling: Happy to be headed off shortly to have dinner with some of our oldest friends to celebrate BG's upcoming birthday.

Looking forward to: Book club on Tuesday. We had to reschedule last week because of a forecast of icy moving into our area just about the time we actually started talking about the book. Said iciness, of course, did not move in until after ten.

Question of the week: I'm pretty excited to have the sun shining today; make me a much happier girl. But I know a lot of people really enjoy rainy, cloudy days. Which do you prefer?