A Single Thread by Tracy Chevalier

Publisher’s Summary:
1932. After the Great War took both her beloved brother and her fiancé, Violet Speedwell has become a "surplus woman," one of a generation doomed to a life of spinsterhood after the war killed so many young men. Yet Violet cannot reconcile herself to a life spent caring for her grieving, embittered mother. After countless meals of boiled eggs and dry toast, she saves enough to move out of her mother's place and into the town of Winchester, home to one of England's grandest cathedrals. There, Violet is drawn into a society of broderers—women who embroider kneelers for the Cathedral, carrying on a centuries-long tradition of bringing comfort to worshippers.

Violet finds support and community in the group, fulfillment in the work they create, and even a
growing friendship with the vivacious Gilda. But when forces threaten her new independence and
another war appears on the horizon, Violet must fight to put down roots in a place where women
aren't expected to grow.

Told in Chevalier's glorious prose, A Single Thread is a timeless story of friendship, love, and a woman crafting her own life.

My Thoughts:
Which comes first for Chevalier – the idea for a new story about a woman or the discovery of a subject she’s dying to research? She never seems to run out of either the story ideas or the interesting subjects to explore and she always finds a way to make center the story around women, even when the historical focus has been on the men (as with Griet in The Girl With The Pearl Earring, a book about the girl who inspired the painter Johannes Vermeer).

In A Single Thread, the history and the art are less well known. And while there really was a Louisa Pesel, who lead the broderers who made the embroidered kneelers, cushions, and other accessories for Winchester Cathedral, this is not her story. Instead it is the story of a group of women, the broderers, who form their own kind of tapestry as their lives are bond together. It's also the story of a group of women who became known as the "surplus" women and the story of single women in the 1930's, a time when single women were looked down on once they reached a certain age, and the story of women who had to hide in plain sight because of their sexuality. At the heart of the book lies Violet, a woman struggling with grief from the deaths of her father, brother, and fiancé and trying to find her place in a world where nothing more is expected of her than to take care of her aging, unpleasant mother.

WhenViolet can't take it any longer, she moves away, taking a job as a typist, a job that pays so little that she can't even afford to eat hot meals and where her coworkers are vapid girls who talk of nothing but finding a husband. It's a real measure of how miserable life with her mother was when this life is better than that was. Then one day she chances upon a church service recognizing the latest batch of completed embroidered works and meets a young women who will help her find a place among the group of broderers. It's just the thing that Violet needs to help her come back to life and find her place in the world. Soon she's found a strength she never knew she was capable of and a group of women to support her. 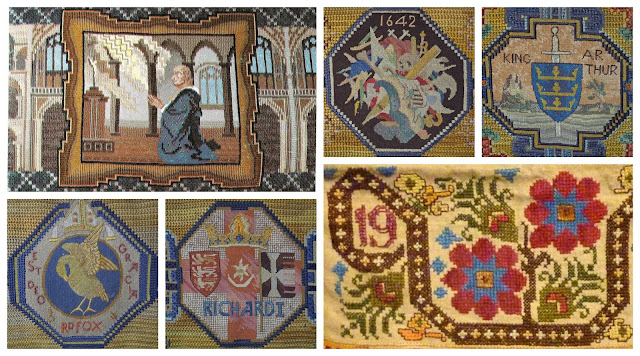 It's a quiet book (one reviewer called it "gentle"), heavy on the details of the embroidery (as well, a the music and skill behind the ringing of the bells in the Cathedral) and events unfold slowly. I listened to it and Fenella Woolgar does a lovely job; I can't imagine it's a book someone would find themselves unable to put down in print, though. Yet, I can also see it being exactly the kind of book that might be adapted into a movie because Chevalier is so marvelous and bringing her subjects to life. The colors and textures of the embroidery, the scale and majesty of the Cathedral, the mechanics of ringing the bells, and the visible circumstances of her characters' lives. There is one character and story line I felt could have been left out of the book entirely and nothing would have been lost; in fact, I might well have enjoyed it more without the threat that storyline carried. It's not a book for everyone, particularly those that enjoy a more fast-paced book, but I think Chevalier's fans will have been pleased with this one.