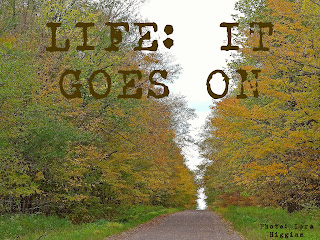 Happy Sunday! It's been a good week at Casa Shep. Lots of things to report enjoying and today will be more of the same. It's been cool here this week but the 80's are coming back this week and, while I know a lot of you are thrilled that fall is here, this girl is going to enjoy the warmer temps again. I did finally finish  swapping out the summer decor for fall and I may make a trip to the pumpkin patch this week. All of which kind of sums up both Nebraska's and my mindset in September!
Last Week I:
Listened To: I did a double-time re-read of Furious Hours to prep for book club. It had been so long since I read it that I couldn't remember enough details to set up the game I wanted us to play so a re-read was in order. Then I started the Omaha Reads book for this year, After The Flood, which my book club will be discussing in October. 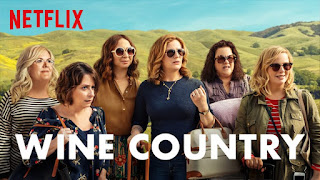 Watched: Lots of sports, several episodes of Grace and Frankie, and last night The Big Guy, Miss H, and I watched Wine Country, starring Amy Poehler and Tina Fey. None of us was expecting all that much out of it but we were all in the mood for something light that none of us had ever seen before. Turns out this one had all three of us laughing...a lot. The 20 minutes or so fell a little flat and was predictable; but, overall, we all enjoyed it.
Read: I finally finished The Overstory. I have very mixed feelings about this one. As so often happens, I don't get why it won the Pulitzer Prize. Yes, it's unique and makes readers think about our place in the universe, but...Well, the rest is for my review.
Made: It's been a busy week and not much cooking has been going on. I made a chicken pesto bake which was a do-again meal. BG was on a roll in the kitchen; he made an apple pie with homemade crust (very good for his first solo effort at crust) and a loaf of what I will generously call sourdough "bread." Not sure what went wrong with that; knowing BG, he'll be trying it again sooner rather than later.
Enjoyed: So much people time (now there's something you won't hear me say very often!). Tuesday was book club, Wednesday was happy hour with two of my besties, Thursday I went into work (I love, love working from home but it is nice to work with people once in a while), then Friday Miss H arrived for the weekend.
This Week I’m: 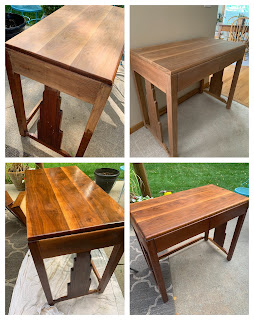 Planning: On moving this beauty to its new home. My father-in-law built this library table when he was in high school, eighty years ago. Some of their family friends actually had it for a long time until BG talked them into giving it back to the family. Some years ago, when there really wasn't a good place for it upstairs any more, it got relegated to the basement where the kids used it as a desk. Sadly, the top took a beating and at one point, the back brace even got broken. It was a sad looking piece of furniture. A couple of years ago, my dad repaired it and last week I finally brought it out of the basement to get it cleaned up. The plan was just to clean up and restore the top. But, as all of my plans do, I decided to do more than I had planned, completely sanding it down to bare wood then bringing it back to life with just oil. Now it will serve as a vanity space in one of the guest rooms. I like to think that Jack would be pleased with what it looks like now!
Thinking About: Fall deep cleaning. Heck, I might even finally get the windows cleaned outside!
Feeling: Devastated by the death of Justice Ruth Bader Ginsburg. She was such an inspiration for so many, the first Jewish female on the Supreme Court, a champion of the common person and women's rights.
Looking forward to: Lunch with Mini-him and Miss H then we're headed to BG's hometown for dinner with dear friends we haven't seen since March.
Question of the week: I can't believe it took us six months to jump on the sourdough bread bandwagon. Have you one of the many who have tried their hand at making sourdough bread through this pandemic?