Pin It And Do It Challenge - More Cupcakes!

What a great asset Pinterest was for getting ready for graduation! Want to find a new recipe? Just search for it and you'll get all kinds of options. Oh sure, you can do that any where on the net but I never have been good about keeping my bookmarks in order and you don't have the pictures. After we made the pink champagne cupcakes, Miss H decided we would abandon the idea that all of the cupcakes had to be pink when she got the notion that Key Lime cupcakes would really be great. If only there were a recipe! 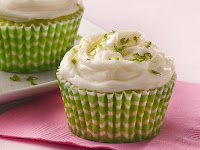 Well, of course there is! It does mean that you'll have to buy a bottle of key lime juice which will set you back twice what a bottle of regular lime juice. Because we made the cupcakes a couple of days before the party and then were cranking out the frosting of all 200 cupcakes in one afternoon, we had to forgo the glaze that the recipe calls for. I knew that was going to mean we were losing some of the key lime flavor so some of the liquid I used in the frosting was key lime juice instead which worked just fine. We also added a few drops of bright green food coloring as well. These were a big hit at the party!

What other new flavors could we discover? Hmm, since the Key Lime cupcakes called for lime gelatin and I had orange gelatin in my pantry I wondered if there was also a recipe that called for that ingredient. A search for Orange Creamsicle Cupcakes brought up a lot of choices. I didn't want to start from scratch - I had too much going on - so I looked for one with a cake mix as a start. To get something that worked for me, I pulled the cake recipe from here and the frosting recipe from here.

Our cupcake plates looked so pretty with so many different colors and flavors of cupcakes - pink, orange, green, purple and even bright blue. We are going to be having a lot of fun looking for other cupcakes recipes on Pinterest this summer. Any volunteers to eat all of those cupcakes we can't possibly eat?!