On this weekend when we celebrate graduations, the opening of swimming pools, the kick off of summer and the annual Indianapolis 500, let us not forget those who have gone before us, particularly those who have served our country and made the ultimate sacrifice. 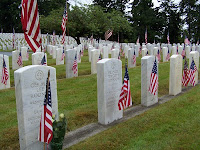 Email ThisBlogThis!Share to TwitterShare to FacebookShare to Pinterest
Labels: holiday