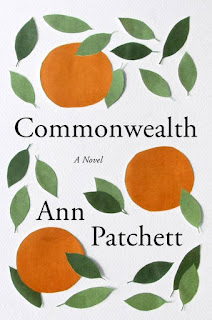 Commonwealth by Ann Patchett
Published September 2016 by Harper
Source: my copy courtesy of the publisher and TLC Book Tours in exchange for an honest review

Publisher's Summary:
One Sunday afternoon in Southern California, Bert Cousins shows up at Franny Keating’s christening party uninvited. Before evening falls, he has kissed Franny’s mother, Beverly—thus setting in motion the dissolution of their marriages and the joining of two families.

Spanning five decades, Commonwealth explores how this chance encounter reverberates through the lives of the four parents and six children involved. Spending summers together in Virginia, the Keating and Cousins children forge a lasting bond that is based on a shared disillusionment with their parents and the strange and genuine affection that grows up between them.

When, in her twenties, Franny begins an affair with the legendary author Leon Posen and tells him about her family, the story of her siblings is no longer hers to control. Their childhood becomes the basis for his wildly successful book, ultimately forcing them to come to terms with their losses, their guilt, and the deeply loyal connection they feel for one another.

Told with equal measures of humor and heartbreak, Commonwealth is a meditation on inspiration, interpretation, and the ownership of stories. It is a brilliant and tender tale of the far-reaching ties of love and responsibility that bind us together.

My Thoughts:
Ann Patchett. 'Nuff said, in my opinion. This is my fifth book by Patchett (I own three others) and I have never finished one of her books disappointed. Every book is unique but Patchett's writing is alway exceptional. Which is why I got a little giddy when I was offered this book for review.

And then I had to read 2900 pages in 5 weeks before I could get to this book. Which might not be that big a deal for some of my fellow book bloggers but it's a lot for this girl. Which leads to this confession: I haven't finished this book yet. I could have. I could have raced through the book in the past three days but it would have been a blur. I wasn't willing to do that. I wanted to savor this book. I knew that going in because I've read Patchett before. I knew it from the first sentence:


"The christening party took a turn when Albert Cousins arrived with gin."

By 100 pages, Patchett has made me really want to get to know this blended, screwed up family. To watch them come together. To watch them fall apart.


"Here was the most remarkable thing about the Keating children and the Cousins children: they did not hate one another, nor did they possess one shred of tribal loyalty. The Cousinses did not prefer the company of Cousinses and the two Keatings could have done without each other entirely. The four girls were angry about being crowded together into a single room but they didn't blame each other. The boys, who were always angry about everything, didn't seem to care that they were in the company of so many girls. The six children held in common one overarching principle that cast their potential dislike for one another down to the bottom of the minor leagues: they disliked the parents. They hated them."

But maybe what really grabbed me was Patchett writing about a character going through chemotherapy. Like a whip, she pulled me straight back into the chemotherapy center I'd spent so much time in five years ago - the camaraderie with the nursing staff, the distance between patients, the bags of poison to kill the cancer cells, the bags of medicine to combat nausea and nerves, the recliners, the naps, the quiet conversations and bonding. 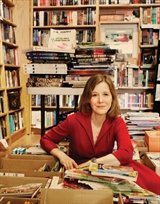 So, I'll be back again to talk about this book when I finish it. In the meantime, check out the full tour. Thanks so much to the ladies at TLC Book Tours for including me on this tour.

Ann Patchett is the author of six novels and three books of nonfiction. She has won many prizes, including Britain’s Orange Prize, the PEN/Faulkner Prize, and the Book Sense Book of the Year. Her work has been translated into more than thirty languages. She lives in Nashville, Tennessee, where she is the co-owner of Parnassus Books.

Find out more about Ann on her website and follow her bookstore, Parnassus Books, on Twitter. And, of course, if you leave anywhere near Nashville or are visiting there, you should definitely go give Parnassus Books some love.
Posted by Lisa at 1:30 AM