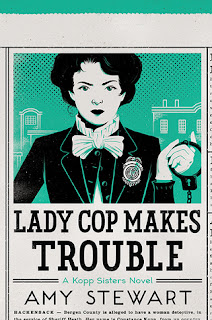 Lady Cop Makes Trouble: A Kopp Sisters Novel  by Amy Stewart
Published September 2016 by Houghton Mifflin Harcourt
Source: my copy courtesy of the publisher through Netgalley in exchange for an honest review

Publisher's Summary:
After besting (and arresting) a ruthless silk factory owner and his gang of thugs in Girl Waits with Gun, Constance Kopp became one of the nation’s first deputy sheriffs. She's proven that she can’t be deterred, evaded, or outrun. But when the wiles of a German-speaking con man threaten her position and her hopes for this new life, and endanger the honorable Sheriff Heath, Constance may not be able to make things right.

Lady Cop Makes Trouble sets Constance loose on the streets of New York City and New Jersey--tracking down victims, trailing leads, and making friends with girl reporters and lawyers at a hotel for women. Cheering her on, and goading her, are her sisters Norma and Fleurette--that is, when they aren't training pigeons for the war effort or fanning dreams of a life on the stage.

My Thoughts:
Every bit as fun as the first book in the series, Girl Waits With Gun (my review), in Lady Cop Makes Trouble Constance is truly front and center when a prisoner escapes while she's meant to be guarding him, putting her new position as a deputy and the sheriff's freedom at risk.

Again the story is based on the true lives of the Kopp sisters, which does constrain Stewart somewhat because she does try to stick very closely to the facts of the sisters' lives. But there is plenty of room for Stewart to flesh out the characters, their relationships, the manhunt, and Constance's fight to become one of the first female law enforcement officers in the country. Consequently, we spend a lot of time in the jail and the courthouse at a time when early prison reforms were being pushed.

In fact, all of the time period comes alive - the legal system, the lives of tenement dwellers, a world on the brink of war, changing transportation modes, clothing styles, and, most importantly, the battle of women to be independent equals.