Seduced by Mrs. Robinson: How The Graduate Became The Touchstone of A Generation by Beverly Gray
Published November 2017 by Algonquin Books of Chapel Hill
Source: my copy courtesy of the publisher in exchange for an honest review

When The Graduate premiered in December 1967, its filmmakers had only modest expectations attached to what seemed to be a small, sexy, art house comedy adapted from an obscure first novel by an eccentric twenty-four-year-old. There was little indication that this offbeat story--a young man just out of college has an affair with one of his parents’ friends and then runs off with her daughter--would turn out to be a monster hit, with an extended run in theaters and seven Academy Award nominations.

My Thoughts:
I was seven years old when The Graduate came out; clearly I didn't see it for years after it was released. Still, I can't remember a time when I wasn't aware of it. Let's face it, everyone knows the Simon and Garfunkel soundtrack. I've read some interesting things about the making of the film before so I didn't even read the synopsis when I saw this book was available.

Here's some of what I learned:


"The casting of Dustin Hoffman as The Graduate's romantic leading man was a shock to Hollywood, which had spent decades trying to sidestep the Judaic roots of its founders. But in the wake of The Graduate, young Jewish males were suddenly everywhere, and often they were playing characters with backgrounds similar to their own." 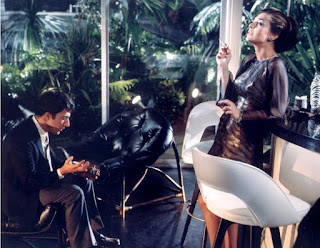 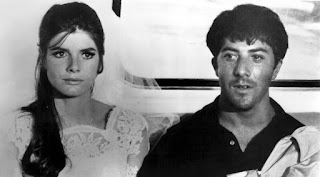 "In hindsight, it's easy to wonder: If Ben and Elaine have backed away from the future that's been preordained for them by a hypocritical older generations, where exactly are they headed? The fact that there's no good answer reminds us of what this film may actually portend. Perhaps that's what it's secretly about - the end of the happy ending."

"The Graduate's prescience about matters of grave concern to the Baby Boom generation gave it a life of its own. If we young Americans were anxious about parental pressure, or about sex (and our lack thereof), or about marriage, or about the temptations posed by plastics, it was all visible for us on the movie screen. Today The Graduate continues to serve as a touchstone of that pivotal moment just before some of us began morphing into angry war protesters and spaced-out hippies."

"...those of my generation - didn't much want to face a life built on a bedrock of our elders' choices. In Benjamin we found a hero willing to turn his back on the kind of bright upper-middle-class future we weren't sure we wanted."


"The Graduate lasts partly because it offers something for everyone, the restless youth; the disappointed elder; the cinephile who values the artistic innovation that's the legacy of director Mike Nichols. And this film has also burrowed its way into Hollywood's dream factory. The American movie industry, which worships box-office success, has learned from The Graduate brave new ideas about casting, about cinematic style, about the benefits of a familiar pop music score."