This week I am looking forward to spending time with family. I don't actually like turkey or stuffing but when I smell that bird cooking, I know that my family will soon be sitting down together - talking, laughing and raving about how my mom has gotten the best "do" on "Great-grandma's Beans" ever. We'll all eat more turkey, mashed potatoes, sweet potatoes, cranberries, scalloped corn with oysters and frozen salad than we should. And sometime later, my mom will pull out several different kinds of pies and a couple of other desserts and we'll all moan about how full we are as we plop some whipped cream on top of our pumpkin pie. 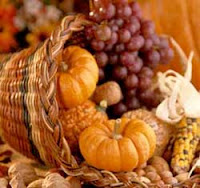 But Thanksgiving with my family is not entirely about food; it's about the traditions that my parents have created for the family to celebrate each year. When the oldest grandchildren were still in grade school, my parents put together a "turkey trot" for the them. It's a treasure hunt, with clues for each child and, when they were younger, a pilgrim hat to be worn. With grandchildren in their 20's and the baby of the family now in high school, you might think it was time for the turkey trot to fade into history. But, to the grandchildren, the turkey trot is as much a part of the day as the turkey and it has evolved so that they continue to be challenged as they hunt for their treasure box. 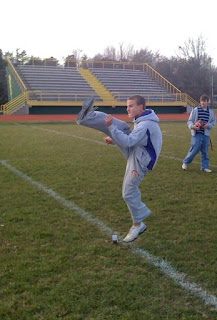 As an alternative to walking around the block to burn off some of those potatoes one particularly warm Thanksgiving Day, a group of the guys headed up to the football field at the nearby high school to toss some footballs and kick some field goals. A competition ensued and a tradition was born. Now, no matter what the temperature (and it has been very cold some years) a good portion of the family heads up to the field to compete and watch as my brother-in-law attempts to maintain his dominance of the competition.


The tradition that most reminds each of us how very much we have to be thankful for happens late in the afternoon when Grandma, the moms, and the grandchildren head over to do some shopping. But we are not shopping for ourselves (a point that was often difficult when the children were in single digit ages!). Each of the grandchildren is giving an amount of money by my parents to select gifts for children whose families need help at the holidays. Most years we adopt a family. The grandkids are in charge of selecting gifts for the children. The moms and Grandma make sure the parents have gifts to open as well. When we get back to my parents’ house, we wrap the gifts. Knowing that we are able to bring some happiness to another family is something we are all grateful for each year.
Posted by Lisa at 3:56 PM
Email ThisBlogThis!Share to TwitterShare to FacebookShare to Pinterest
Labels: family, holiday, Sunday Salon