Chances are if you live on either coast there are only three things you know about Nebraska:

1) It's flat. True enough but only in some places. We also have our fair share of river bluffs and the Sand Hills.

2) It's nothing but corn. Not true. There is a lot of corn, to be sure. But Nebraska also has a lot of ranches and even a national forest and waterfalls.

3) We are crazy about the University's football team. Now that is entirely true! In my family, we're more then just a little bit convinced that the things we do can effect the outcome of games. Everyone in my family hangs out a Nebraska flag on game days and a Husker figure of some sort that stands out front. Oh yes, we are certain that each of these things must be in just the right place. Team's not playing well? Maybe Herbie needs to be moved. And to say that we are loud when we watch games, especially together, is a major understatement. 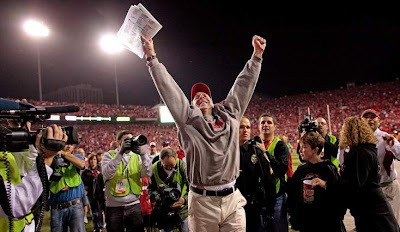 Why do we love our team so much? Tradition. Love of the game. And scenes like the one above, where a coach can look like a little boy.

Lest you think we're all football lunkheads, we also love to read...about our Huskers! Kenny Walker, who played for the Huskers and is deaf, wrote "Roar of Silence." When Kenny came onto the field or made a big play, fans did the sign language equivalent of clapping. "Hero of the Underground," which made the NY Times best seller list, was written by Jason Peter who played on championship teams at Nebraska and went on to play in the NFL. Our beloved coach and now Athletic Director, Tom Osborne, has written several books including "Beyond the Final Score" and "Heart Of A Husker."