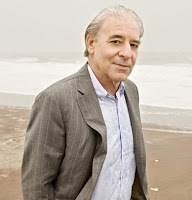 The Rhodies have, once again, come through with a recommendation that doesn't include just a single book but a whole catalog. So if you find you love the author, you will be at no loss for more titles to read!

"Mama Shepp take note, as well as other readers. We have from the first been adoring fans of Alan Furst who writes spy novels set in Eastern Europe in the period from WWI to WWII."

" We just finished his most recent ("Spies of the Balkans") and think it may be our favorite of the lot. Ten titles so far, and we hope he will be good for ten more. I can only think to compare him with Graham Greene in style and mood. His characters are inevitably interesting and his plots, while intricate, are easily followed.These are not who dunnits; not cozys, not loaded with silliness like the James Bond books or charming eccentrics like the John LeCarre novel. "

"People fall in love, betray, kill and die, survive the grim life of their times or fail to do so. He does a wonderful job of conveying the look and feel of places and historic Do begin with "Night Soldiers" because there is occasionally some carry-over of one or another character. However, each book will stand on its merits."

Patrick Anderson, book reviewer for the Washington Post, has this to say about Furst and his latest:


"I read my first Alan Furst novel nine years ago and urged Book World's readers to do themselves a favor and seek out everything this talented writer had in print. Now, having read Furst's 11th and latest novel, Spies of the Balkans, I find that my advice holds. About all that has changed since 2001 is that Furst was relatively unknown then, and today he is widely recognized as one of the finest spy novelists active."

Posted by Lisa at 11:32 AM
Email ThisBlogThis!Share to TwitterShare to FacebookShare to Pinterest
Labels: Mama Shepp's Family Recommends, mystery/thriller