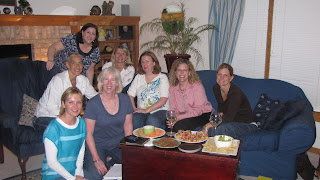 Last month my bookclub, The Omaha Bookworms, got the chance to do a Skype interview with Jennie Nash and talk about her book, The Threadbare Heart.  Jennie is such a delight to talk and even put up with us when we got off topic on occasion.

Jennie wanted to know which character our group liked the most and it was pretty much unanimous that Eleanor was our favorite character in the book.  We all liked the relationship between Lily and Eleanor and the fact that when it came right down to it, Eleanor was jealous of Lily.

Because so much of her book The Last Beach Bungalow reflects Jennie's own experiences, we wanted to know if the same was true of this book.  At first Jennie said there really wasn't much that came from her own life except for the character of Gordon who was somewhat loosely based on the man who just married Jennie's mother.  But the more she talked, the more Jennie confessed that there was some element of her own thought process in the book.

The seamstresses in the group wondered if Jennie was herself a seamstress but she confessed that she was not.  She said that she had gone into a fabric store looking for samples of fabrics to get some ideas, however, and found a wonderful man there that really made her understand how fabric speaks to people.

One of our members wanted to know if Tom really had not had an affair or if that was a lie to make Lily feel better. Jennie said that he had not but laughed at our midwest preoccupation with the fact that the woman Lily fears he's been cheating with never wears a bra.

One of our members, who couldn't be with us, has also experienced a home fire and said that she, too had made lists after the fire just like Lily did.  So we wondered if Jennie knew someone who had lost a home in a fire.  She said she didn't but just felt like that was something that she would do if she had that experience.

Because Lily suffers from migraines, we asked if Jennie did as well and she said that she has suffered from quite severe migraines for years.  It's what lead her to write the non-fiction book that she is working on e-publishing right now.  Before the group met, I had a chance to talk to Jennie about this and she said that it's a whole different thing to go this route over traditional publishing and she's learning a lot.

We always have to know about what an author is working on now and Jennie confided that she's got something very different in the works.  When she approached her editor with another book idea, her editor suggested that she go bigger this time, as opposed to the smaller in scope novels about families that she has done up until now.  She's got some very interesting ideas for it--boy, did we get off topic talking about one of them!

I think we'd all agree that The Threadbare Heart made a great book club selection; we certainly found a lot to discuss.  And if your book club likes to find books that will allow you to speak with the author, Jennie makes a terrific guest to the party!
Posted by Lisa at 7:34 PM
Email ThisBlogThis!Share to TwitterShare to FacebookShare to Pinterest
Labels: author interview, Omaha Bookworms