Island Beneath The Sea by Isabel Allende

Island Beneath The Sea by Isabel Allende
480 pages
Published April 2011 by HarperCollins Publishers
Source:  the publisher and TLC Book Tours

Toulouse Valmorain, in powdered wig, buckles on his shoes and the latest fashions and ideas from France, arrived in 1770, at age twenty, on the island that will eventually become Haiti. He has come to help his father but when he arrives, ill prepared for the conditions and the responsibilities of running a plantation, he finds that his father is dying and the plantation in shambles. Over the next few years, Valmorain manages to turn the land around but it is not until he finally finds, in Cuba, a Spanish bride, that he rebuilds his home.

To prepare for her arrival, Valmorain calls on the services of his friend, and former lover, VioletteBoisier. Violette literally puts his house in order. She hires for his wife a young slave girl, Zarite. Born into slavery to a white sailor and a slave mother she never knew, Zarite has lead a difficult life. In Valmorain's house and under his protection, Zarite (Tete) will no longer be beaten but will give birth to his children, be required to tend to his wife's every need as she is consumed by madness, and be denied the freedom he promises her for years.

The two will be tied together for decades to come as they flee the bloody slavery rebellion, seeking refuge in New Orleans. When Tete has the opportunity to escape Valmorain during the rebellion, she can't take it, knowing it would mean abandoning their daughter and his son, who she has raised as her own. In Louisiana,  Valmorain will try to establish a plantation using more humane methods to treat his slaves as Zarite will fight to retain her own humanity, despite new humility, and to protect those she loves while trying to find love herself.

Through the arc of their lives, they are influenced by a huge cast of characters including Dr. Parmentier, Valmorain's abolitionist friend; Sancho Garcia del Solar, Valmorain's vice-loving brother-in-law; Tante Rose, a slave who is natural healer and voodoo leader; and Hortense Guizot, Valmorain's second wife, a woman made the lives of all around her miserable.


Allende is the queen of the sweeping historical sage about people you come to know intimately. This is the fourth book by Allende I've read and I went into it with high hopes for the kind of story that I have come to love. Before Allende writes a book, she clearly does a massive amount of research. Sometimes the book can get bogged in all of that research. Publisher Weekly's reviewer had a major problem with this, stating that Allende was offering nothing new. That well may be true in general, but there was a lot here that was new to me. I wasn't reading the book for new insights into history; I was reading the book for the story set in an historical context. Like Barbara Kingsolver, Allende can slip into moral lesson mode and occasionally falls back onto stereotypes.

All of which I forgive Allende because her story telling simply sweeps me up and carries me along. Her descriptions of place are beautiful, her characters (for the most part) are well-rounded, and there is an underlying tension throughout the book. Those of you who are regular readers know that I have a hard time with magic and spiritualism in a book, but when Allende does it, it works for me (in this book, it appears in the form of voodoo).

Most of this book was told as a third person narrative, but periodically Allende switched to Zarite's voice which was honest and poetic.


"This is how they told it. This is how it happened in Bois Cayman. This is how it is written in the legend of the place they now call Haiti, the first independent republic of Negroes. I don't know what that means, but it must be important because the blacks say it with applause and praise and the whites say it with rage."

Island Beneath the Sea is filled with passion, sadness, hope and heartbreak in the way that only Allende can do it.


"Many [newborns] died of tetanus, paralyzed, their jaws frozen; that was one of the island's mysteries, because whites did not suffer from that disease. The masters did not suspect that those symptoms could be provoked, undetected, by sticking a fine needle into a soft part of the baby's head before the cranial bones hardened. In that way the baby went happily to the island beneath the sea without ever experiencing slavery."

Thanks to TLC Book Tours for including me on this tour. For other reviews on this book and several others by Allende, please check out the full tour. My apologies for not getting this review posted on Thursday--thanks, Blogger, for being down most of the day! 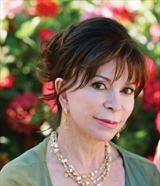 To learn more about Isabel Allende and her books, check out her website.
Posted by Lisa at 12:00 AM
Email ThisBlogThis!Share to TwitterShare to FacebookShare to Pinterest
Labels: book review, historical fiction, TLC Book Tours