Happy 29th anniversary to my beloved Big Guy! This year has really served to remind us both of those vows we said before our family and friends all of those years ago. And how did we celebrate, you may ask? Last night we enjoyed dinner at a wonderful Italian restaurant but today we have spent most of the day going our own ways - he to enjoy the beautiful fall colors and me to have Miss H's senior pictures taken. Here's what he saw today: 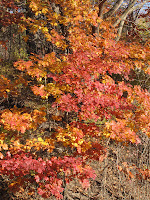 Thursday evening The Omaha Bookworms enjoyed a wonderful evening with Mary Helen Stefaniak, author of The Cailiffs of Baghdad, GA. Ms. Stefaniak stepped in and immediately became one of the gang, particularly when she mentioned to group that she was interested in the World Series game. When you let on to a group of women, half of whom have spent some time in St. Louis, that you're cheering for the Cardinals, you have made yourself a group of friends! We started by picking her brain about her writing process and ended by talking about the Ku Klux Klan--what a fantastic conversation! Pictures to come!

I've mentioned before that the Omaha Bookworms is a diverse group of women; we count among our members our own political activist. You have probably not heard of the Trans-Canada effort to build a pipeline through Nebraska but it really is something that everyone should be concerned about given that its planned route takes it directly over the Ogallala Aquifer, one of the world's largest aquifers. That's gotten our former President of the League of Women Voters so riled up that she appeared in front of the state legislature in her Susan B. Anthony outfit, something she may regret having told a blogger! Here she is in action:

This evening we're enjoying some literary television. First we watched "Once Upon A Time" which I'm thoroughly enjoying (but The Big Guy says it feels like "Desperate Housewives" goes goth to him). Now we're watching "Case Histories" on PBS, a series based on Kate Atkinson's books about Jackson Brodie with this episode based on her book "When Will There Be Good News." We both quite liking this and wish we would have caught the first two episodes.

I'm finishing up Steve Inskeep's Instant City for a TLC Book Tour this week. I'll also have reviews of Julia Child's My Life In France and The Kitchen Counter Cooking School by Kathleen Flinn. What's on your reading agenda this week?
Posted by Lisa at 8:50 PM