Gerta Pohorylle and André Friedmann and are young Jewish refugees who arrive in Paris in 1935. Caught up in the scene that is Paris on the cusp of World War II,  the two were first friends, then business partners and finally lovers. Friedmann taught Pohorylle the art of photography and she, in turn, remade him into Robert Capa, launching his career, and remade herself into Gerda Taro. She became one of the first female combat photographers and he became internationally known for his photograph, The Fallen Soldier. taken early during the Spanish Civil War. 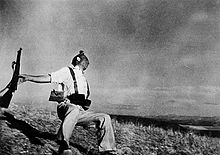 In her author notes, Fortes who is Spanish, stated that she's been drawn to the work of Capa for years. It was in 2008, when 127 undeveloped rolls of film that Capa, Taro, and their friend David Seymour had taken during the war, that Fortes decided it was time to write the story. Interestingly, I found the book to be much more Gerda's story.

Waiting For Robert Capa struggles to find it's voice. Sometimes, it's almost overly poetic as Fortes writes about the environment of Paris. Other times it reads much more as if it were a work of non-fiction, detailing movements in battles and dropping names of other well-known participants in the Paris and/or Spanish settings. For me, I far preferred when Fortes cut back on the descriptiveness and got to the meat of the story. It's a story I've been interested in for a couple of years and it felt as if Fortes and written fully-developed characters who may very well be much like the people on which they are based. I find myself even more interested in this pair whose relationship seems as if it truly were one with origins in the pages of a novel.

Thanks to TLC Book Tours for giving me the opportunity to read this one. For more opinions, please see the full list of reviews.
Posted by Lisa at 6:00 AM
Email ThisBlogThis!Share to TwitterShare to FacebookShare to Pinterest
Labels: book review, historical fiction, TLC Book Tours