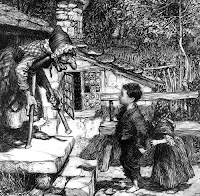 In The Sweet Porridge, once again a child is proven to be smarter than all of the adults around. A little girl and her mother are poor and hungry until a crone in the forest gives the girl a pot that will make sweet porridge just for asking. The girl and her mother never have to go hungry again. Then one day, when the girl is gone, the mother asks the pot to make porridge. Unfortunately, she doesn't know how to "turn it off." It keeps making porridge until all of the village is swimming in the stuff. Only one house remains. Thanks heavens there's a child in it that thinks to say "stop pot." Really, this didn't occur to any of the adults?!

A number of the tales had obvious religious overtones. In The Ear of Corn, there was once a time, when "God himself still walked the earth," where corn stalks bore ten times the number of ears of corn and the ears grew the full length of the stalk. Then one day, as a mother and daughter walked through a field, the daughter fell in the mud. The mother used a handful of the corn to clean the dress. God, seeing the woman using his gift in such an ungrateful way, vowed to allow no more corn to grow. Giving into prayers, though, he allowed enough corn to grow on the stalks to feed the birds.

Perhaps the most famous of all foody fairy tales is Hansel and Gretel, the story of two hungry children lured deep into the forest in search of food. Finding a house entirely made of candies. Lured in by the woman who lived there, the children soon found themselves held by the woman who planned to fatten them up to eat. Once again, the children outsmarted the adult, throwing her into her own oven. No mean stepmother in this one, though. This time it's the children's own mother who tries to rid herself of them. Sadly, Hansel and Gretel weren't able to push her in the oven as well. But at least they were able to return home with their arms filled with jewels and the family never went hungry again.

I'm wondering if my family would like me to read them a foody fairy tale as a Thanksgiving entertainment? Maybe after a few glasses of wine, we'll enjoy them as high comedy!
Posted by Lisa at 11:49 PM
Email ThisBlogThis!Share to TwitterShare to FacebookShare to Pinterest
Labels: Fairy Tale Fridays