My Life In France by Julia Child

My Life In France by Julia Child with Alex Prud'homme
352 pgs
Published: my edition published June 2009
Source: I bought this one

Julia McWilliams was over thirty years old when she met and fell in love with Paul Childs. She couldn't cook, she couldn't speak French and she wasn't much of a foodie. Yet two years after the couple married in 1946, Julia found herself moving to France. She quickly set out to remedy both her language and cooking shortcomings. She roamed the streets of Paris, learning the language, local customs, and, mostly importantly, the food.


"This is the kind of food I had fallen in love with; not trendy, souped-up fantasies, just something very good to eat. It was classic French cooking, where the ingredients have been carefully selected and beautifully and knowingly prepared." 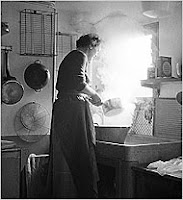 Paul was a gourmand and Julia, now in love with the food of France herself, enrolled herself in Le Cordon Bleu cooking school so that she could learn to prepare the kind of foods they loved. Although she found herself out of place at the school, she learned quickly and soon became lifelong friends with her teacher. In 1951 Julia met Madame Simone Beck Fischbacher (Simca as she would forever after be known). Simca was every bit as enthusiastic about food as Julia. Simca and Louisette Bertholle had been working on a cookbook. The three began working together, operating a cooking school out of Julia's kitchen. Soon Louisette and Simca invited Julia to help them with their cookbook, particularly once they decided that the book needed to be written in such a way so that it appealed to the American audience. The rest, as they say, is history. The first cookbook took years to write and have published. Julia was a a perfectionist when it came to making sure that the recipes were correct, that they would produce good results every time and that they were written in such a way as to make them doable for any cook. It was that first book, Mastering The Art Of French Cooking, the caught the attention of a public television producer in Boston and earned Julia her own cooking show. Soon Julia found herself every bit as well known as her cookbook. 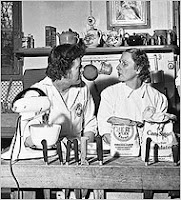 Julia and Simca would remain friends for the rest of their days and compile a second volume of Mastering. But the two had vastly different methods of choosing and testing recipes for the books and Julia's fame was a thorn in the side of Simca who, no doubt, felt that she deserved equal attention. Despite the fact that the Childs spent their time in France in a house on land the Fischbachers owned, the relationship was often strained.

Paul and Julia spent the last years of their lives in the U.S. where Julia filmed her television shows in her own kitchen, a kitchen that became so famous itself that, when Childs moved to California, it was moved to the Smithsonian.

I picked this one up as a companion to Julie and Julia after seeing the movie of the same name. One of the things I loved about the movie was the back and forth between the two women's lives. I was surprised, then, to find that a lot of what was shown in the movie in the Julia parts did not actually happen. Julia didn't try her hand at hatmaking before she took cooking lessons, she didn't stumble across Simca and Louisette in the dressing room at a party, and she and her sister weren't close. I found myself repeatedly distracted by comparing the book and the movie.

Paul and Julia Childs certainly led an interesting life and the book portrays a fascinating look at Europe post-World War II. I can understand why so many people have enjoyed this book but I had some problems with it. Childs seems to have been under the belief that her readers also know French, frequently referring to things only by their French name or including sentences in French. How do I grasp how wonderful your meal was if I have no idea what the name of the dish means? I sometimes felt the book grew repetitious and often more detailed than was necessary. I can't say that I liked Julia very much. She was quick to point out the flaws of friends and family alike but never seemed willing to acknowledge her own faults. Still, I admire her tenacity, her passion and her deep love for her husband.
Posted by Lisa at 6:00 AM
Email ThisBlogThis!Share to TwitterShare to FacebookShare to Pinterest
Labels: book review, Fall Feasting, food, memoir, nonfiction