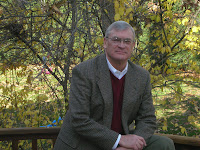 Please help me welcome Douglas Jacobson to Lit and Life today. Jacobson is the author of Night of Flames: A Novel of World War Two (which I reviewed here) and the new novel The Katyn Order, which I'll be reviewing soon. I asked Jacobson to talk about creating believable characters.

How to Make Characters Believable

Natalie Jastrow was a stunningly beautiful woman. She was also brilliant and filled with self-confidence to the point of being headstrong. Yet she had trouble with relationships and self-doubts about how she fit into American society. She could be cool and calm under duress, yet had serious lacks of judgment in making critical decisions. When Herman Wouk created this unforgettable heroine of The Winds of War and War and Remembrance he gave us a character we cared about from the very first page of these epic novels until the last. And, because of that, we cared about his story.

It is because they are believable. They are as real as our best friends, our sisters or brothers. They have personality flaws and quirks, they don't always act in a predictable way. They can at times be bold and courageous, and at other times hesitant and filled with self-doubt. Just like we are. They are not supermen....they are real people.

My first book was Night of Flames: A Novel of World War Two. After it was released in 2007, many readers contacted me to tell how much they enjoyed the character of Anna Kopernik. It was through her that they experienced and understood the story of Poland in WW2. The ironic thing about that is that she was not even on my mind when I started writing the story. She just evolved along the way and before long she became my dominant character, the person I cared about the most.

When I was writing The Katyn Order I wanted the readers understand what it was like to have everything and everyone you care about be suddenly and brutally torn away. Would you be able to carry on? Would you be filled with hate and a quest for vengeance  And, if you were ever given a chance for redemption, could you rise above your inner demons and seize the moment? Adam Nowak evolved into that character as I wrote the story. Time will tell if he is one of those memorable characters that readers care about.

Thanks, Douglas! I always love to hear about how authors develop their characters and it never ceases to amaze me how many of them happen organically.
Posted by Lisa at 1:30 AM
Email ThisBlogThis!Share to TwitterShare to FacebookShare to Pinterest
Labels: author guest post