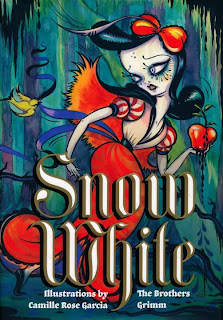 "Mirror, mirror, on the wall, who's the fairest one of all?"

You all know at least the story - wicked stepmother, beautiful girl seeking asylum with a group of dwarfs, wicked stepmother tries to kill girl, handsome prince saves girl. What sets this one apart are the illustrations by Camille Rose Garcia, he fantastic colors and the simply superb text. It is a visual masterpiece. The publishers have combined a variety of sizes, fonts and backgrounds so that even the pages without illustrations are beautiful.

Garcia's characters are a little creepy, with their oversized, triangular heads and sharp features - it's one of her trademarks. I must admit that it was a little difficult to imagine the mirror finding either the wicked stepmother or this version of Snow White as the fairest of them all!

According to her website, Garcia's "cartoon characters in wasteland fairy tales are critical commentaries on the failures of capitalist utopias, blending nostalgic pop culture references with a satirical slant on modern society." She sites as her inspiration early works by Disney and Max Fleisher. Garcia has also illustrated Alice's Adventures In Wonderland for HarperCollins Publishers.