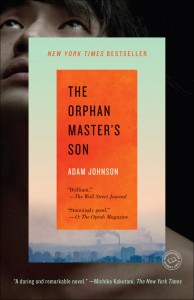 I goofed. I just knew I could squeeze one more book in before I started reading this one. I was sure I could knock this one out in a few days. I wasn't counting on two things: the reduced reading time my new work schedule has caused and the fact that I was not going to want to rush this book.

The Orphan Master's Son tells the story of Jun Do, a North Korean whose opera-singing mother was kidnapped when he was too young to have any memory of her and whose father took the job of Orphan Master so that he could be with his son. For the rest of his life, Jun Do will fight the misconception that he is an orphan himself and the stigma associated.
As an "orphan," Jun Do is stuck doing the worst jobs, but it's by doing these jobs that he learns the skills and life lessons that will allow him to pursue a passion that will put him at odds with the most powerful man in North Korea.

Do I love this one so far? No, but I think I might by the time I'm finished. I have no way of knowing how much of what Johnson has written about life in North Korea might be true. It certainly all seems plausible and, in any case, it's something I've never read about before. I have to keep pausing and questioning if such things might be true (patrolling the tunnels that run from North Korea, through the DMZ, and on into South Korea, for example). As I read a scene about the fishing boat Jun Do is working on coming across a shipping container's worth of Nike shoes floating in the sea, I kept trying to figure out how I was going to describe that scene to you in a way that would do it justice. I'm fascinated by how each of Jun Do's experiences are shaping him and how his opinion of his life and his government shift and alter.

You'll be hearing more about this book when I finish it. For now, know at this point I'm already convinced that this is a book that lives up to all of the accolades it has earned.

Thanks to TLC Book Tours for including me on this tour. For other opinions, check out the full list of reviews, probably by people who have actually finished the book!