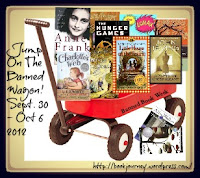 I get parents' desire to protect their kids, I do. I understand that, particularly with teenagers, you can't always be with your kids and it's possible that they'll get their hands on books you might not want them reading. Thanks to Sheila, at Book Journey, for hosting "Jump On The Banned Wagon!" 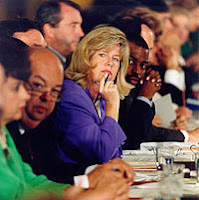 In the 1980's I railed against Tipper Gore's and the Parents Music Resource Center's fight to put parent advisory labels on record albums. I cheered as first Frank Zappa, then Dee Snider, and finally even John Denver testified before a Senate committee against the labels and censorship.

Little more than a decade later, I found myself grateful to have those warning labels in place. Mini-him was a handful, CD's are small, and earbuds make it possible to listen to music without having your parents hear it. Knowing that he couldn't buy the CD's with the warning labels on them himself and that I would know whether or not I need to pre-listen to a CD before buying him one with a label, made my life easier. I got to choose what he listened to - sort of. I couldn't stop him from listening to music I objected to when I wasn't around and I had no control over what earned the advisory. And I still had a problem with that.

Just as I have a problem with one person or a small group of people determining what is available to my kids, or me, to read. When it comes to books, the people who challenge books, who want them banned, are not content simply to place an advisory label on them. They want them entirely unavailable. 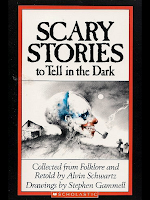 One of my boys' favorite books growing up was Alvin Schwartz's Scary Stories to Tell in the Dark, one of the most commonly challenged books (in this case, the entire series was challenged) in the very decade in which they were reading it. It was, obviously, challenged because it's scary. Well, duh. It tells you that right in the title, parents. If you see your child reading this book, it should be immediately obvious that this may be a book you'll want to check for yourself to see if your kid is mature enough to read it. You certainly shouldn't need someone else to do that for you. By the way, the stories really are scary, hardly toned down at all from the original folklore from which they are drawn.

Anyone out there ever gone camping? What is the number one thing kids want to do when they go camping? Well, after they eat enough s'mores to make themselves sick. They love to tell scary stories around a campfire. Did the same parents who challenged this book also ban their children from going camping?

There are a lot of ways in which I am not a "cool mom." I monitored the movies my kids watched, the video games they played, the places they went. My seventeen-year-old still has to give me the phone number of the friend she is with just in case I can't reach her at her number because I will be checking up on her.

I have also keenly been aware that I could not protect my children forever; sooner or later my children would need to be making their own decisions. In fact, it was one of my most profound duties as a parent to teach them how to do that. So, while, I monitored what they were exposed to, I also allowed them to watch things, to listen to thing, and to read things that would allow us to talk to them about more mature subject matter. As the parent, I decided what those things would be. Even though my children are all grown up now, I will continue to insist on a parent's right to make those decisions for themselves.