Unbroken: A World War II Story of Survival, Resilience, and Redemption by Laura Hillenbrand
Published November 2010 by Random House Publishing
Source: my copy courtesy of my parents - who bought it to read for my book club meeting (I worked that well, didn't it?)

Louis "Louie" Zamperini was a bad boy. Not precocious. Not misguided. Bad.It was a miracle he wasn't hauled off to juvenile detention as a six-year-old. It's a wonder his parents didn't try to give him away. Yet for all of the trouble he caused at school, all of the things he stole, all of the fights he got into, his family never gave up on him.

When Louie was a teenager, his brother, Pete, decided Louie needed a direction and started training him to be a runner. What a runner he turned out to be. Before long, Louie was setting distance running records running for his high school. He was so good that he was accepted to USC, where he soon become a nation contender at the mile. Zamperini was so good he began training for the Olympics. In 1936 he made the U.S. team, competing in Berlin and impressing Hitler. Sure that if he worked four more years, he could medal, Louie focused all of his attention on the 1940 Olympics.

World War II was the end of Zamperini's dream. Louie enlisted in the Army Air Corp and was stationed in the Pacific theater as a bombardier on B-24 aircraft. In a mission over the tiny island of Nauro, the plane Zamperini was flying on was hit nearly 600 times, barely making it back to base. Those who survived were quickly assigned to another B-24, the Green Hornet. Even among planes that were unreliable and dangerous, the Green Hornet was considered a lemon. On their first flight, out over the Pacific Ocean, the plane crashed. Only three men survived. After 47 days only two men remained, surviving only by their wits, the food they could catch (birds and small fish) and rain water. As terrible as that ordeal was, things got much worse when the pair (Zamperini and pilot Allen Phillips) reached the Marshall Islands and were immediately captured by the Japanese. The two were held in brutal prisoner of war camps until the end of the war, in August 1945. First in a prison where the prisoners were not acknowledged as prisoners of war and therefore not registered, Zamperini was later transferred to two other camps where he was the particular target of the extremely sadistic Mutsuhiro Watanabe (known as The Bird).

After he returned from the war, Zamperini returned to a hero's welcome. But without a college degree (he never finished at USC), finding a real job was difficult. Louie made and lost money in numerous schemes but never enough to sustain him for long. In 1946, after a brief courtship, he married the much younger Cynthia Applewhite. But marriage and being a father were not enough to save Louie from his demons. Constantly haunted by nightmares of The Bird, Louie drank more and more. Eventually Cynthia left him, planning to get divorced. But when she returned to work on doing that, her efforts to help Louie became his salvation.

Zamperini worked tirelessly after that time to help wayward young boys, just as he had long ago been helped by his brother and to preach forgiveness. He has been awarded numerous honorary degrees and in 2011 appeared on the Tonight Show. The daredevil kid inside has never completely disappeared - there is a picture in the book of 81-year-old Louie skateboarding.

Unbroken is the story of man's unbelievable capacity for cruelty but, ultimately, the story of man's unbelievable capacity for survival and forgiveness. It should come as no surprise (although if you want it to be, you should skip ahead to the next paragraph) that, in the end, Zamperini was able to forgive his tormentors. There would not, surely, have been a book had he not found it possible. I did not - I remained angry for Louie long after I finished the book. It made me understand why my dad, who grew up in during the war, refused to buy a Japanese car for most of his life.


Laura Hillenbrand suffers from chronic fatigue syndrome and was only able to talk to Zamperini by phone as she worked on the book. Louie had previously written his own book and Hillenbrand drew on a wealth of other resources to craft a book that evokes strong emotion and never lags, even when writing about the 47 days in the ocean. She is certainly helped by a compelling story and a unique lead character, but Hillenbrand does not make this solely Louie's story. Throughout the book, Hillenbrand incorporates and memorializes the men that played a part in Louie's life, making this a book about much more than one man.

Unbroken was the Omaha Bookworms September selection and we invited parents to join us to read and discuss the book. It made for a wonderful book club selection, particularly with the multiple generations. We talked a lot about the story and about Hillenbrand's writing.

Several things stood out for us. Both my mom and I had marked that same page where Hillenbrand talked about the way in which the Japanese camps sought to deprive Zamperini and Phillips of the one thing that had sustained them during their time in the ocean, their dignity. Hillenbrand says:


"This self-respect and sense of self-worth, the innermost armament of the soul, lies at the heart of humanness; to be deprived of it is to be dehumanized, to be cleaved from, and cast below, mankind."

As inconceivable as the type of treatment the Japanese guards meted out is, Hillenbrand does a marvelous job of trying to explain it. The culture of Japan itself made the Japanese feel contempt and revulsion for soldiers who surrendered or were captured. All Japanese were raised to believe that to be captured in war was shameful and this thinking made it acceptable to abuse, enslave and murder captives. Hillendbrand also writes that "some of the worst abuses inflicted on captives and POWs may have arisen from the guards' discomfort with being abusive." 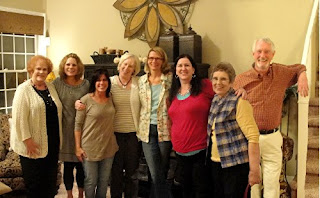 While we did think it was implausible that so detail could be recalled (even considering that Louie kept diarys), none of us felt that this detracted from the book. Certainly, the fact that we had guests helped to keep our discussion on track but this was one of the best discussions of a book the Bookworms have ever had. We all highly recommend it for all book clubs.