Guest Review: The Light Between Oceans by M. L. Stedman

The Light Between Oceans by M. L. Stedman
Published July 2012 by Scribner

My mom sent me a text the other day and asked if I wanted a review of this book. Of course, I told her. I don't think I know this one. And then I saw the cover and realized that I have seen this book on some of your blogs but, for some reason, I must have skipped right over it. Reading my mom's review, I can see now that it was a big mistake. Here's what Mom thought of The Light Between Oceans:

Tom Sherbourne is a returning Australian WWI veteran who carries with him a lot of baggage from the war and from his childhood. On his arrival home, he is fortunate to get a job as a lighthouse keeper and because of his fine work, he is given a promotion and sent to Janus Rock on a temporary basis. (We later learn much more about his childhood and how it impacts him as a husband.)

On the boat on his way to western Australia, he prevents a fellow passenger from being raped. He thinks it is the end of the story. Keep this in mind. While he is in Point Partegeuse waiting to go to the island, he meets a young girl (Isabel) who is highly attracted to him. It is a brief encounter and he soon sets off to perform his duties. Janus Rock is 100 miles off shore; remember that this is 1916 and it takes about seven hours to reach the island by boat. No one lives on the island except the lightkeeper. A supply boat comes only every three months and the men stay only briefly as they unload the supplies. When the first boat comes, a letter from Isabel is enclosed and thus begins a sporadic correspondence. When Tom’s stint is up, he is given shore leave, he goes back to Partegeuse and marries Isabel, and they take up their solitary life on the island–Tom has proven his abilities and is given a permanent position.

Life seems to go along well and they seem to love their life on this island. They learn to cope and to adjust and to adapt to married life. Isabel becomes pregnant and has a miscarriage which causes her great grief. Soon she has another miscarriage and later she carries a son for seven months before he is stillborn. She is devastated. (Imagine being alone during these events.)

And then one day life takes a dramatic change when a small boat washes on shore carrying a dead man and a very young live baby. Isabel convinces Tom to not report the incident much to his unrest. He finally gives in, buries the body, and Isabel who is still able to nurse the baby adores her, names her, and Lucy becomes a part of their life. It is a wonderful life for all of them until their three years are up and they go home on shore leave and learn the story of the man and the baby.

From this point on the story becomes extremely intense and the reader is torn in what should be done. Tom’s conscience becomes bothered, Isabel becomes more possessive of Lucy, and tension develops. Things come to a head after Tom and Isabel head back again for shore leave and Lucy is baptized.

To tell more would spoil the story for the reader. Suffice to say you will be conflicted in your feelings and you will come to know the characters so well that when you finish the book, you are not ready to put these people out of your mind. 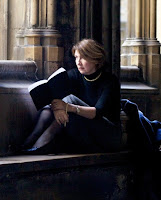 This is Stedman’s first novel and she has done a superb job of writing the plot. That would have been enough to make the book one that you would not want to put down. In addition, she has a wonderful way of using descriptive words and phrases–example: The thunder became frustrated when it could not keep up with the lightning. Stedman is from Australia and she has done an excellent job of injecting native flora and fauna and describing the landscapes.

It is probably obvious that I loved this book and am eager for Stedman to write another. It would make a wonderful book club book as there is so much material for a very deep discussion.

Thanks, Mom! Mmmm, maybe we'll have to think about this one for next year's Omaha Bookworms multi-generational book.
Posted by Lisa at 1:30 AM
Email ThisBlogThis!Share to TwitterShare to FacebookShare to Pinterest
Labels: book review, guest review, historical fiction