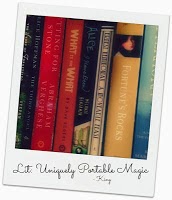 Years ago, when our little people were still little people (instead of all taller than I am), we cancelled HBO so they wouldn't "accidentally" watch something they shouldn't. We've lived without it just fine since then, rarely regretting adding yet more expense to our monthly cable bill. But HBO is getting ready to film a mini-series of Elizabeth Strout's Olive Kitteridge starring Frances McDormand as Olive, Richard Jenkins as Olive's husband, and Bill Murray as Frank Kennison. I'm pretty sure I   need to be able to watch this when it comes out. I'm already trying to work out how to convince The Big Guy of that.

Speaking of Bill Murray, he's just wrapped work on the George Clooney-directed The Monument Men based on the book of the same title by Robert Edsel. The film also stars Clooney, Matt Damon and Cate Blanchett. This book has been on my radar since it came out; now I need to make sure I read it before the movie comes out! 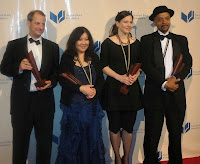 In a recent interview with NPR's Weekend Edition Saturday, McBride talked about finding Little Onion's narrative voice: "I love the language of, you know, the old, black, country man with a blues guitar and ... boots and the quick banter. ... I just love that voice and I wanted this character to be an old man looking back on his life and then telling a, just a grand whopper." (NPR)

I've been working on a reading plan for the rest of the year. With only two scheduled reviews left for 2013, I've put together a pile of books to work on to satisfy challenges. Given that I have 16 books left to read for the Mount TBR Challenge, I think I can safely say that one is going to be a "fail." But I should be able to finish all of the others 2013 if my Christmas obligations don't get in the way.

In the past couple of months I've really found my reading preferences changing; most of my favorite books of late have been nonfiction. Two of the three audiobooks I picked up last week were nonfiction and I'm hoping to get through both of them by the end of the year. Do you ever find your reading preferences shifting or a particular genre or subject matter calling out to you?