This Is The Story Of A Happy Marriage by Ann Patchett

This Is The Story of A Happy Marriage by Ann Patchett
Published November 2013 by HarperCollins Publishers
Source: my copy is courtesy of the publisher and TLC Book Tours in exchange for this review

Publisher's Summary:
This Is the Story of a Happy Marriage is both wide-ranging and deeply personal, overflowing with close observation and emotional wisdom. Stretching from her tumultuous childhood, from a disastrous early marriage and a later happy one, she charts the hard work and joy of writing, and the unexpected thrill of opening a bookstore. Patchett shares stories of the people, places, ideals, and art to which she has remained indelibly committed. Brimming with thoughtful advice and emotional wisdom, this collection brings into focus the large experiences and small moments that have shaped her as a daughter, wife, writer, and friend. An irresistible blend of literature and memoir, This Is the Story of a Happy Marriage is a unique examination of the heart, mind, and soul of one of our most revered and gifted writers.

My Thoughts:
I've been a fan of Patchett's since I read Bel Canto in 2006. It remains one of my all-time favorites and based on that book alone, I would happily pick up anything Patchett writes. So I didn't hesitate to accept this book for review even knowing it would take me out of my comfort zone. As so often happens, it turns out that it's good to step out of your comfort zone periodically.Imagine my delight to discover an entirely new type of book! It's not really an entirely new type of book, just new to me. Of course, now that I've discovered essays I'm kicking myself for ignoring them all of these years. Perhaps if I'd just thought of them long ago as non-fiction short stories, I would have given them a chance sooner. Maybe it just took Ann Patchett to convince me.

Patchett opens the book explaining how she came to be a novelist and how writing for magazines allowed her to support herself and gave her the time to write fiction. This Is The Story of A Happy Marriage is a collection of essays she wrote for those publications. The voice I've enjoyed in Patchett's novels shines through in her essays as does her sense of humor and her honesty. She writes about her childhood home which was so poorly built that mushrooms grew in the carpet, about how the Rodney King beating affected her father's legacy as a Los Angeles policeman, about her book Truth and Beauty which stirred up a controversy when it was chosen as required reading for Clemson University's incoming freshmen, and about love in its many forms.


"I felt certain that this had been one of the great loves of my life, and I crawled into the bed and held her in my arms and told her so.  Her eyes were open, and she touched her finger to her lip. I was crying and then that was that." 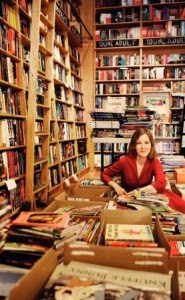 Thanks to TLC Book Tours for including me on this tour. For other impressions of this book, check out the full tour.

Ann Patchett is the author of six novels: the New York Times bestselling State of Wonder and Run; The Patron Saint of Liars, which was a New York Times Notable Book of the Year; Taft, which won the Janet Heidinger Kafka Prize; The Magician’s Assistant; and Bel Canto, which won the PEN/Faulkner Award, the Orange Prize, the BookSense Book of the Year, and was a finalist for the National Book Critics Circle Award. She is also the author of two works of nonfiction: the New York Times bestselling Truth & Beauty and What now? Patchett has written for many publications, including the Atlantic Monthly, Harper’s Magazine, Gourmet, the New York Times, Vogue, and the Washington Post. She lives in Nashville, Tennessee.


Posted by Lisa at 1:30 AM
Email ThisBlogThis!Share to TwitterShare to FacebookShare to Pinterest
Labels: book review, essays, nonfiction