Life of Pi by Yann Martel 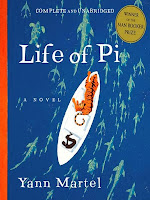 Life of Pi by Yann Martel
Published 2002 by Houghton Mifflin
Source: my copy was borrowed from a friend

Publisher's Summary:
Pi Patel is an unusual boy. The son of a zookeeper, he has an encyclopedic knowledge of animal behavior, a fervent love of stories, and practices not only his native Hinduism, but also Christianity and Islam. When Pi is sixteen, his family emigrates from India to North America aboard a Japanese cargo ship, along with their zoo animals bound for new homes. The ship sinks. Pi finds himself alone in a lifeboat, his only companions a hyena, an orangutan, a wounded zebra, and Richard Parker, a 450-pound Bengal tiger. Soon the tiger has dispatched all but Pi, whose fear, knowledge, and cunning allow him to coexist with Richard Parker for 227 days lost at sea. When they finally reach the coast of Mexico, Richard Parker flees to the jungle, never to be seen again. The Japanese authorities who interrogate Pi refuse to believe his story and press him to tell them "the truth." After hours of coercion, Pi tells a second story, a story much less fantastical, much more conventional-but is it more true?


My Thoughts:
I acquired this book as part of a book swap a couple of years ago but neither of us has gotten around to reading the books we borrowed. It wasn't until I finally got around to watching the movie adaptation, which I very much enjoyed, that I decided it was time to pick this one up.

When you have a good part of a book taking place on a lifeboat lost at sea with only a young boy and a tiger as passengers, there is a very real risk that the book could drag or become entirely too full of itself. Life of Pi does neither. Pi Patel is a very spiritual young man, knowledgable about animals, so his survival depends on his skill, his wits, and his incredible faith. Into this story, Mantel manages to weave amazing beauty, horrific brutality, and, unbelievably, humor. The book is slow to build and, at times, very hard to read (okay, I'll admit it, I had to skim over some parts they were just so hard to read), but it has stunning plot twists and marvelously thought provoking. I was surprised by how much I enjoyed this book and by how much it made me think about religion and all the ways there are to believe in God.
Posted by Lisa at 1:30 AM
Email ThisBlogThis!Share to TwitterShare to FacebookShare to Pinterest