Island Fog by John Vanderslice
Published: April 2014 by Lavender Ink
Source: my copy courtesy of the publisher and TLC Book Tours in exchange for an honest review

Publisher's Summary:
Island Fog is a thematic, novel-length collection of stories, all set on Nantucket Island, Massachusetts. Nantucket as we know it began as an English settlement relatively early in the colonial period of the United States. In the heyday of its nineteenth century success as a whaling center, the island, for being as small as it is, was quite the cosmopolitan center. Sailors from across the globe mingled with a mixed local population of descendants of the original English settlers, black Americans, and Native Americans. Today too Nantucket is known as being especially open to visitors from around the world. When one travels there, one feels that one is no longer in the United States but in a culturally indistinct, in-between land, somehow equidistant from North America, the Caribbean, and Northern Europe.

Island Fog captures the physical, social, and political atmosphere of the island from both historical and contemporary perspectives. It is divided into two halves, with the first half containing five historical fictions and the latter half containing six contemporary ones. The first historical fiction is set in 1795, only a decade removed from the young America’s formalized independence from Britain, and the last historical fiction is set in 1920, one year after America’s passage of the infamous Volstead Act (prohibition). The middle three historical stories are set, respectively, in 1823, 1837, and 1846, the period when the whaling industry enjoyed its greatest profitability and the island its greatest wealth. The set of contemporary fictions begin in the late twentieth century and continue into the middle of the first decade of this century. Thus the stories of Island Fog bridge four centuries of Nantucket history.

My Thoughts:
In the both the historical and contemporary stories in this collection, Vanderslice does a fine job of using fictional characters and  Nantucket's history to explore a wide variety human experiences and themes including racism, religion, mental illness, sexuality, loss, marriage, and, heaven help us, cannibalism. In each of the stories, Vanderslice's characters come to unsettling realizations about their lives, realizations that leave the reader unsettled as well. There's a darkness to the stories that has stayed with me days after I finished reading them and a depth to the characters that made me want to learn more about them.

My own quibble with this book was that it was physically difficult to read - the binding was so tight it, I had to work to keep the book open to read it  and the writing was quite small. I get a little cranky when I have to break out the readers!

Thanks to the ladies of TLC Book Tours for including me on this tour. It was good for me to range out into short stories and this collection was stronger than most I've read. For more opinions on this book, check out the full tour. 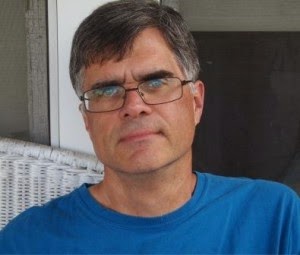 John Vanderslice teaches in the MFA program at the University of Central Arkansas, where he also serves as associate editor of Toad Suck Review magazine. His fiction, poetry, essays, and one-act plays have appeared in Seattle Review, Laurel Review, Sou’wester, Crazyhorse, Southern Humanities Review, 1966, Exquisite Corpse, and dozens of other journals. He has also published short stories in several fiction anthologies, including Appalachian Voice, Redacted Story, Chick for a Day, The Best of the First Line: Editors Picks 2002-2006, and Tartts: Incisive Fiction from Emerging Writers. His new book of short stories, Island Fog, published by Lavender Ink, is a linked collection, with every story set on Nantucket Island, Massachusetts.
Posted by Lisa at 1:30 AM
Email ThisBlogThis!Share to TwitterShare to FacebookShare to Pinterest