Summary:
In the 1930's in small-town Stillwater, Mr. and Mrs. Popper and their two children are scraping by on the seasonal work Mr. Popper does painting and wallpapering houses. Mr. Popper is a man who dreams of the Antarctic and grand adventures and is content to spend his off season reading about that part of the world and following the explorations of Admiral Drake. He's even written to the Admiral who one evening surprises the family by addressing Mr. Popper on the radio, telling him that a gift is on it's way. 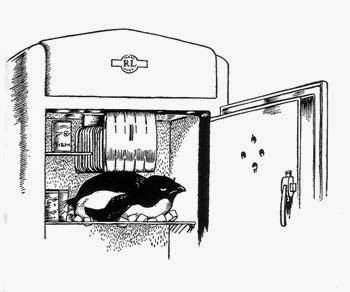 Shortly, a special delivery arrives on the Popper's doorstep - a penguin Mr. Popper names Captain Cook. Soon the refrigerator is fitted out as a home for Captain Cook and the well-behaved penguin becomes something of a local celebrity. When he becomes ill and it's clear he is lonely, Greta comes to join the family as well. Before long, ten eggs result in ten more penguins and the Popper's basement becomes a frozen home and playground for the feathered family. Just as the expense of keeping the penguins becomes more than the Poppers can manage, a solution presents itself and off go the Poppers and then penguins on a national theater tour. 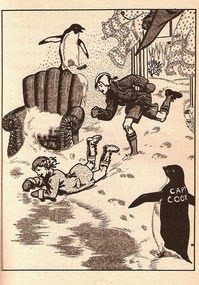 My Thoughts:
In the 1930's in small town America, penguins were still such a novelty that it's entirely believable that people wouldn't even know what the creatures were. Even today, the penguin exhibit at the zoo is one of the most popular and I've often said I could go to the zoo just to sit and watch them.

Maybe that's why, even though this story is preposterous, it's also so charming. I love that Mr. Popper's dreams come true and that the practical Mrs. Popper succumbs to the birds' charms. The drawings are delightful and there's actually quite a lot to be learned from the book. Perhaps because it was already an older book when I first read it, it feels less dated to me than other childhood favorites I've reread and it's one I look forward to reading to my someday grandchildren.

That movie adaptation, starring Jim Carrey, however...what were they thinking?!