Publisher's Summary:
Meet Oskar Schell, an inventor, Francophile, tambourine player, Shakespearean actor, jeweler, pacifist, correspondent with Stephen Hawking and Ringo Starr. He is nine years old. And he is on an urgent, secret search through the five boroughs of New York. His mission is to find the lock that fits a mysterious key belonging to his father, who died in the World Trade Center on 9/11.

An inspired innocent, Oskar is alternately endearing, exasperating, and hilarious as he careens from Central Park to Coney Island to Harlem on his search. Along the way he is always dreaming up inventions to keep those he loves safe from harm. What about a birdseed shirt to let you fly away? What if you could actually hear everyone's heartbeat? His goal is hopeful, but the past speaks a loud warning in stories of those who've lost loved ones before. As Oskar roams New York, he encounters a motley assortment of humanity who are all survivors in their own way. He befriends a 103-year-old war reporter, a tour guide who never leaves the Empire State Building, and lovers enraptured or scorned. Ultimately, Oskar ends his journey where it began, at his father's grave. But now he is accompanied by the silent stranger who has been renting the spare room of his grandmother's apartment. They are there to dig up his father's empty coffin.

My Thoughts:
I have had my paperback copy of this book since I saw the movie adaptation, starring Tom Hanks and Sandra Bullock, which I loved. And which made me cry several times. So why in the world did I think listening to the book while I drove was a good idea? It wasn't; not only did I tear up more than once, I was often so engrossed as to be something of a hazard on the roads. 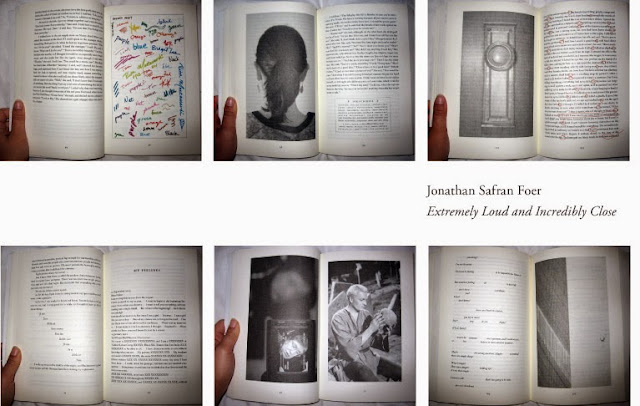 Thanks to Trish (Love, Laughter, and A Touch of Insanity - yeah, her again!), I made this book a read/listen combination. She was so right to encourage me to pick the book. While the narrators did a extremely good job and book is incredibly visual and should not be missed. Ha! You see what I did there? It's what Foer does throughout the book - not overkill but enough that your ear really starts to pick it up when listening to it.

In the movie, Oskar's storyline takes center stage. His grandparents are involved but their own stories are largely left out. In the book, Foer uses all three as first-person narrators with Oskar's grandparents telling their stories through letters (his grandmother through letters she writes to Oskar, his grandfather to Oskar's dad, the son he never met). All three are buried under their own grief - Oskar as he tries to come to terms with the death of his father and his grandparents by the loss of their son but also by the loss of their families during the bombing of Dresden during World War II.

The New York Times reviewer was particularly impressed with this book, calling it "precious and forced" and, essentially, derivative. Since I'm not familiar with most of the books that reviewer referenced, I don't get that from the book. And while I sometimes wondered if I even understood what the heck Foer was trying to say, I was willing to attribute it to the mental state of the characters. I was quite taken with the the unusual additions to the book and very fond of Oskar (although I'm certain a real version of him would wear thin on me in no time).  I loved the conversations between the characters, as I did much of the writing, and this is a book that I will keep on my shelves. And you know how rarely I do that!