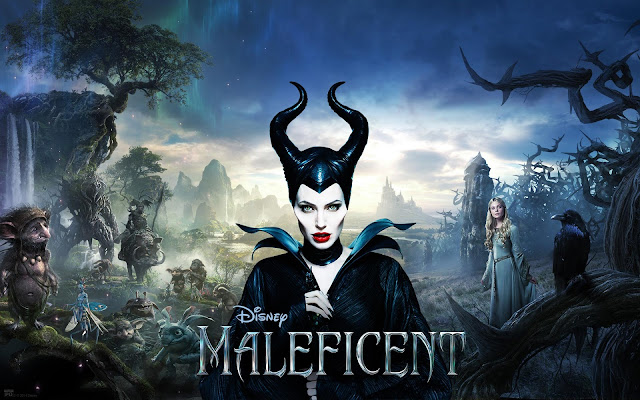 History is always told from the point of view of the victor, a point of view which can't always be trusted to tell the whole truth. Likewise, we can't always trust that we are getting true story from any narrator. What if the person we've been taught is the good guy has actually done a really horrible thing? What if the bad guy has a reason to be pissed off (sorry, Mom, I know how you hate that word)? What if the story you've been told all of your life is a lie?

As with Stephen Schwartz' musical "Wicked," in "Maleficent" we are introduced to a familiar wicked woman in a new way, taken back to her much younger, kinder self. Here Maleficent is a good fairy who rules the Moors, a kingdom of fairies and other fantastical creatures. She protests the lands from the neighboring kingdom of humans. When a young boy sneaks into the Moors, Maleficent befriends him and they eventually fall in love. But the boy, Stefan, grows into a man whose ambition causes him to not only betray Maleficent but to burn off her wings. As he rises to become King of the human kingdom, is it any wonder that she becomes consumed with anger and hatred? 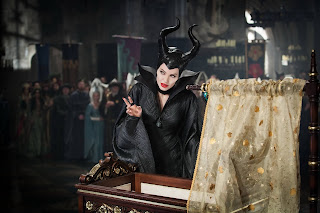 Back to the story we know, when King Stefan and his wife introduce their baby daughter, Aurora, to the court, Maleficent smolders in and places a curse on the young princess that can never be removed. When the queen begs for mercy, Maleficent does allow for the ending for the curse if the sleeping Aurora receives true love's kiss. So off Aurora goes with the three fairies who had just bequeathed her with the gifts of beauty and grace. These three are even more bumbling than in the animated adaptation and Maleficent finds that she must step in to protect the child so that the hapless fairies do not kill the little girl before the curse can be enacted. Soon the sweetness and innocence of Aurora begin to soften Maleficent's heart and Aurora grows up thinking of Maleficent as her fairy godmother, trusting her completely.

King Stefan, on the other hand, spends the years fuming about the curse, trying to find ways to get to Maleficent to destroy her. He grows more and more mad (and by "mad," I mean out-of-his-mind mad). When, despite Maleficent's last minute attempt to reverse the curse, Aurora falls into that deep sleep, Stefan is more consumes with killing his enemy than in saving his daughter. And then there is the scene that made Miss H say "Damn! Plot twist!" Cause, yeah, it was great and changed everything. Some reviewers have praised the movie for its feminist touch - a lead actress who hold all of the power; others have panned it for not being feminist enough - a woman is is so consumes by the betrayal of a man that she allows it to consume her. Who cares? I was looking for a new take on an old story and I got it, one with a fantastic performance by a woman who dominated the screen in every sense. To be honest, Jolie does overshadow all other characters, including Elle Fanning as Aurora, but this is clearly her movie and both Miss H and I enjoyed it and recommend it. Though, not for very young children, certainly no one under about age ten.