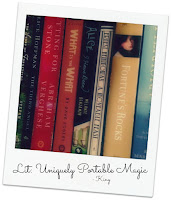 Book reviews? What book reviews? I do have reviews to write but I've been reading too much to take time to write the reviews. Is there actually such a thing as too much uniquely portable magic?

I finally finished Fangirl by Rainbow Rowell which has been on my nightstand for a couple of months. I moved Tana French's In The Woods onto the nightstand for exactly one night. Seriously killer opening pages. I can't just read a few pages a day. So when I finished Paula McLain's Circling The Sun, In The Woods became my main read. Instead, Jane Austen's Love and Friendship got moved to the nightstand. It will be great for little bits of reading at a time.

Which puts me right in line for a couple of readalongs that I haven't exactly officially signed up for in August but which I'm going to try to at least do on my own because they are all books I own and have been wanting to read. After In The Woods, it's on to Eowyn Evey's The Snow Child, also part of a readalong, and then back to the French readalong. That group is reading the first three books in the Dublin Murder Squad series in August.

Now, if I'm really reading up a storm, Circling The Sun  has me inspired to read Beryl Markham's West With The Night and to reread Isak Dineson's Out of Africa. Or maybe just watch the movie? I don't know what I love more about that movie - the scenery, the characters, that house, or the music.

So, yeah, maybe the house will just have to take care of itself the rest of August. This girl's got a lot of great reading to take care of instead! Maybe I'll actually getting around to writing a few reviews while I'm at it.

What books are you looking forward to reading this month?
Posted by Lisa at 1:30 AM
Email ThisBlogThis!Share to TwitterShare to FacebookShare to Pinterest
Labels: Lit: Uniquely Portable Magic