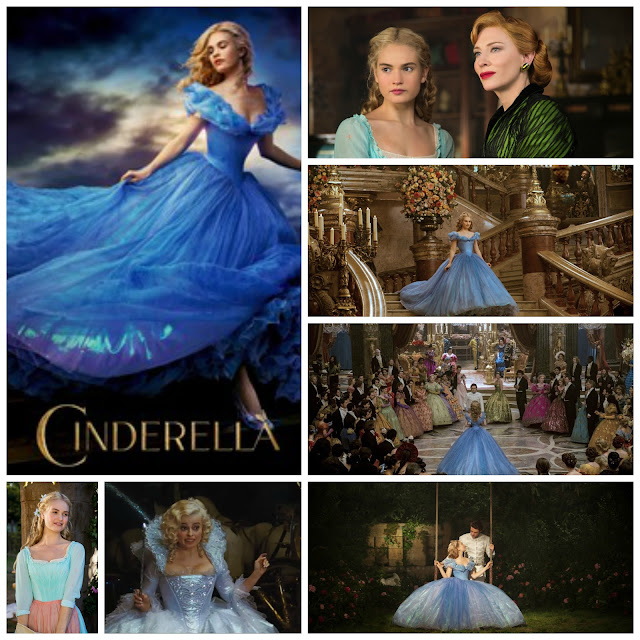 I always approach fairy tale adaptations with mixed feelings. So many of them have proven to be a major disappointment. But after enjoying Disney's "Maleficent" recently, I decided to give their 2015 movie adaptation of Cinderella a chance.

First off, it's Disney, so, yeah, no chopping off of bits of feet to try to fit into the glass slipper and no plucking out of eyeballs. And I'm okay with that. Because, honestly, if I'm taking a young child to a movie, I really don't think they need to see that kind of thing.

Secondly, did you catch who directed this adaptation? I've been impressed with almost every movie I've seen that Branagh's directed. Hopes were high but then I'd never known him to do anything for a Disney kind of audience.

Miss H and I watched the movie together and neither of us was disappointed. The sets and costumes are spectacular, there's not a weak link in the cast, and there are just enough new touches to make the story worth retelling. The story borrows heavily from Disney's own 1950 animated adaptation but this version also pulls in elements of other adaptations including 1998's "Ever After" (starring Drew Barrymore) and 2004's "A Cinderella Story" (starring Hilary Duff).

Branagh gives a more thorough background to the story, a depth to the wicked stepmother, and a healthy dollop of humor. Ella is sweet but realistic, the prince is not as one-dimensional as usual, and there are some additional characters that help round out the story. All in all, well worth the rental.