And The Mountains Echoed by Khaled Hosseini 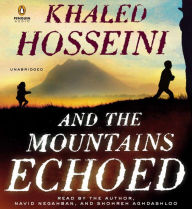 Publisher's Summary:
In this tale revolving around not just parents and children but brothers and sisters, cousins and caretakers, Hosseini explores the many ways in which families nurture, wound, betray, honor, and sacrifice for one another; and how often we are surprised by the actions of those closest to us, at the times that matter most. Following its characters and the ramifications of their lives and choices and loves around the globe—from Kabul to Paris to San Francisco to the Greek island of Tinos—the story expands gradually outward, becoming more emotionally complex and powerful with each turning page.


My Thoughts:
Read that summary and find yourself still wondering what this book is about? That's because And The Mountains Echoed is not so much a novel as a series of interconnected stories, with characters appearing and reappearing throughout the book. In the background runs the story of Abdullah and his sister, Pari.

Abdullah, 10 when the book begins, has raised Pari, 3, since their mother died giving birth to her and their father sank into a depression. Desperate poverty, and a connection through his new wife's brother, result in the children's father selling Pari to a childless couple in Kabul.

From there, the stories fan out, including Abdullah's family and the people involved with the house in Kabul - Pari's new mother, Nila, who flees to Paris with Pari to pursue a life she could not have in Afghanistan; Pari's new father who stays in Kabul, harboring a secret that could get him killed and cared for until his death by Pari's step-uncle whose guilt at setting up the sale of Pari will haunt him to his death;  the foreign doctors and nurses who came to the country care the victims of the violence tearing apart the country; Gholam, Abdullah's half-brother,'s son, who will tie the story back to what became of Abdullah's poor village in light of the wars; and then back to Abdullah, who lives out his life as the owner of Abe's Kabob House in California and who never stops missing his sister.

As with most collections, some stories are not as strong, less interesting and with characters that more are strictly good or bad. Perhaps that comes from Hosseini's own experience with the struggles that Afghanistan has been through since before the Russians invaded.  For the most part, the characters and stories are nuanced and beautifully told. Hosseini brings the larger sorrows of his country down to an intimate level, easier for

The narration is a bit tricky. All three narrators speak heavily-accented English and it can take a bit to fall into their rhythm and inflection. Yet, as this is a book about Afghanis, their voices lend a much more authentic feel to the stories, pulling readers thoroughly into the country.

Posted by Lisa at 1:30 AM
Email ThisBlogThis!Share to TwitterShare to FacebookShare to Pinterest
Labels: Afghanistan, book review, fiction