Another Brooklyn by Jacqueline Woodson

Another Brooklyn by Jacqueline Woodson
Published August 2016 by Amistad
Source: my copy courtesy of the publisher and TLC Book Tours

Publisher's Summary:
Running into a long-ago friend sets memory from the 1970s in motion for August, transporting her to a time and a place where friendship was everything—until it wasn’t. For August and her girls, sharing confidences as they ambled through neighborhood streets, Brooklyn was a place where they believed that they were beautiful, talented, brilliant—a part of a future that belonged to them. But beneath the hopeful veneer, there was another Brooklyn, a dangerous place where grown men reached for innocent girls in dark hallways, where ghosts haunted the night, where mothers disappeared. A world where madness was just a sunset away and fathers found hope in religion.


"...I had Sylvia, Angela, and Gigi, the four of us sharing the weight of growing up Girl in Brooklyn, as though it was a bag of stones we passed among ourselves saying, Here. Help me carry this."*

From the opening paragraph, I wanted to wrap August into my arms. I never once wanted to let her go.


"For a long time, my mother wasn't dead yet. Mine could have been a more tragic story. My father could have given in to the bottle or the needle or a woman and left my brother and me to care for ourselves - or worse, the care of New York City Children's Services, where, my father said, there was seldom a happy ending. But this didn't happen. I know now that what is tragic isn't the moment. It is the memory."

August's father moved August and her brother to Brooklyn in 1973, leaving their beloved Southern farm and their mother. He tried to shelter them from the outside world and keep them inside their apartment. But every parent knows you can't protect your children from everyone forever.


"We had blades inside our kneesocks and were growing our nails long. We were learning to walk the Brooklyn streets as though we had always belonged to them - our voices loud, our laughter even louder. But Brooklyn had longer nails and sharper blades. Any strung out soldier or ashy-kneed, hungry child could have told us this."

In the 1970's, America was a country at war in Vietnam, New York was suffering from blackouts, starving children in Biafra were in the news, Son of Sam was killing young people in the boroughs of New York, white people were fleeing Brooklyn, and drugs were destroying lives in greater numbers than ever. It was a tough time and place to grow up. It was even harder being a girl. Sylvia, Angela, Gigi and August formed a barrier against the world around them. But barriers can't always hold up against parents, boys and sexual desire, and loss.

Woodson's writing is spare but impactful and vivid. Emotionally hard to read but even harder to put down. 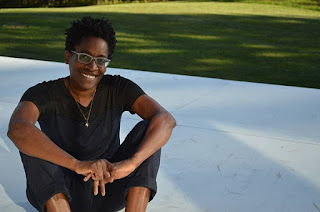 I chose to read this book because I have been wanting to read Woodson's National Book Award winning book, Brown Girl Dreaming, and want to give myself a better understanding about what it's like to be black in the United States. Coming just after I read Jesmyn Ward's Salvage The Bones, Another Brooklyn stands as an emotional lesson about how different and difficult growing up as a young black woman is in this country. It is a lesson that makes me know I have much more to learn.

Jacqueline Woodson is the bestselling author of more than two dozen award-winning books for young adults, middle graders, and children, including the New York Times bestselling memoir Brown Girl Dreaming, which won the 2014 National Book Award, the Coretta Scott King Award, a Newbery Honor Award, an NAACP Image Award, and the Sibert Honor Award. Woodson was recently named the Young People’s Poet Laureate by the Poetry Foundation. She lives with her family in Brooklyn, New York. Find out more about Woodson at her website, and connect with her on Facebook, Twitter, and Tumblr.


*all quotes from an uncorrected proof and may not appear as quoted here in the final product*
Posted by Lisa at 1:30 AM