The Light Between Oceans - A Movie Review...of sorts 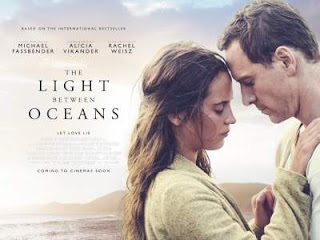 I thought I'd turn to some reviews written by actual paid film reviewers to see if they could help me explain it. The problem is they had wildly differing opinions. David Edelstein, whom I generally agree with, found very little about the movie to like. What? How dare he?

Alright, alright. The film has some problems and I did have a couple of quibbles. But we'll get to those later.


First, let's get to what I loved about the film, David Edelstein be damned. 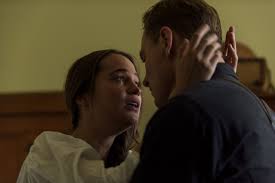 Edelstein complained that the movie was both melodramatic and psychodramatic. I beg to differ. But then I've read the book and, I'd wager to say, he has not. It's an incredibly sad novel with some deep moral questions. It should pull at your heart. Perhaps women, particularly mothers and those who have miscarried or lost a child, will understand the conflict better than most men. But surely most men who have truly loved a woman will also be able to relate to the lengths a man might go to for the woman he loves. 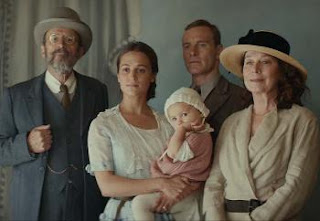 The movie does a wonderful job of telling the story as Stedman wrote it. There are places, as there are in all book-to-movie adaptations, where those who have read the book just "get" it better than those who have not. For example, if you haven't read the book, you don't understand quite how desperate a young girl was to get away from a home that was filled with grief by the loss of both of her brothers in the war and her willingness to marry a man she hardly knew.

It is a beautifully filmed movie and the director does a fantastic job of conveying the isolation Tom and Isabel Sherbourne felt on the lighthouse island but also the beauty of being, literally, between oceans. The relentless pounding of the waves in the beginning sounds overwhelming but soon begins to feel soothing.

And the acting. Oh, my, the acting. I knew Michael Fassbender and Rachel Weisz would give terrific performances. I have never seen either of these Academy award winners give a bad performance (okay, may Weisz wasn't at her peak in The Mummy movies - but who could blame her). I have not yet seen "The Danish Girl," for which Alicia Vikander won an Academy award, so I was unfamiliar with her skills. She utterly disappears into Isabel; her emotional range was incredible. My heart broke for her; tears streamed down my face during more than one scene. 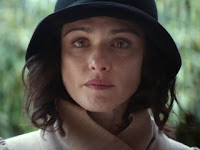 Before I even went into the theater, I had a problem with Rachel Weisz playing the role of Hannah Roennfeldt. While she looks terrific for 46 years old, she's too old for the role.

Another problem I had with the movie also had to do with Weisz's costuming. The bulk of her action occurs in 1927 but her costumes (for the most part) and hair style don't feel right for that time period. Because the costumer continued to put Vikander in the same clothes throughout the movie, the two women appeared to be from entirely different eras. Maybe it was to play up the difference between the two but that's not the way it came off for me.

I couldn't remember the ending of the book but the ending of the movie didn't feel right to me. Turns out, it was mostly right after I looked it up. I suppose I wanted there to be some solution that didn't break Tom's and Isabel's hearts and the director didn't give it to me any more than Stedman had. And there were a couple filming spots right at the end that I didn't like.

All little things that momentarily put me off. But, as I said, these are small quibbles. Because, truly, the movie gave me exactly what I expected and, more importantly, exactly what I wanted. Those paid reviewers may want more from a movie but this girl is very happy with that outcome.
Posted by Lisa at 6:46 PM
Email ThisBlogThis!Share to TwitterShare to FacebookShare to Pinterest
Labels: Australia, book-to-movie, movie review