The Yard by Aliyyah Eniath 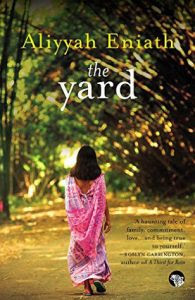 The Yard by Aliyyah Eniath
Published: April 2016 by Speaking Tigers Books
Source: my copy courtesy of the publisher and TLC Book Tours
in exchange for an honest review

Publisher's Summary:
A story of love and redemption, set in Trinidad, that exposes the fault lines in Indo-Muslim culture. Behrooz is brought to a familial complex, The Yard, to live with a devout and extended family, where he struggles to belong. He forms a childish alliance with Maya, a wilful and rebellious girl, and his guardian’s daughter. After they share a night of adolescent tenderness, Maya, fearing retribution, flees to London. Behrooz painstakingly rebuilds his life and marries another. When tragedy strikes, Maya returns to her childhood home. There, she and Behrooz must face up to old demons. Can their love endure? Even after Maya is dealt the most righteous blow of all?


My Thoughts:
The story of the family of an immigrant's descendent's, an opportunity to learn something about the Muslim religion, and the chance to visit a setting I've never visited before were all big selling points when I was pitched this book.

My mother-in-law once visited Trinidad and Tobago and the chance to learn more about that country she enjoyed so much might have been the biggest selling point for me. By and large, though, the setting could have been almost any where. Entail does spend some time talking about the history of the native peoples on the islands and the history of indentured servants there, but, in the present day, there is very little sense of this book being set in a specific place.

Some of that might have had to do with the fact that the book is almost entirely set in The Yard, a compound of houses built by that original immigrant for his family. It was partly a symbol that he had made a success of his life but also a way to insulate his family and keep them together. For some, including Maya, it became something of a prison. But, here again, I didn't get what I was expecting from the book. Eniath does include several scenes of the family coming together for celebrations, there is some discussion about the different ways the Muslim faith is practiced (or not) amongst the family, and we see some of the interactions between the family members. But, for me, beyond Maya's immediate family, most of the family felt almost like stick figures to me. In fact, late in the book, Maya has entirely stopped trying to remember the children's names and who they belong to; I felt much the same way throughout. I wanted more about that family dynamic.

Eniath's focus is the relationship between Maya and Behrooz - The Yard  is, at its heart, a love story Maybe because I could never connect to any of the characters, particularly to Maya, I never got invested in their story. I couldn't understand why Behrooz fell so deeply in love with a girl who did so many things that repulsed him from the beginning and, without that sense of a deep unbreakable bond, I could never understand why he was so devastated when she left and why he wasn't able to move on without her. Without that connection to those two characters, it was hard for me to connect to the book.

There were places in the book where I felt like the whole might have been much tighter had things been edited differently; just the rearranging of some of the elements of the book would have made a difference. The frustrating thing, I think, is that the book is largely based on Eniath's own history, something she obviously wanted to teach others to understand and love. I really wanted to like it more, knowing that. 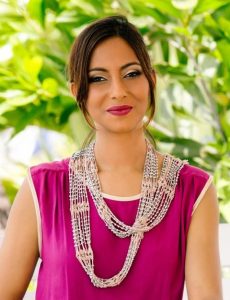 For other opinions, please check out the full TLC Book Tour.  Thanks to the ladies at TLC for including me on the tour.

Aliyyah Eniath was born in Trinidad and Tobago; her ancestors hailed from Uttar Pradesh, India. She’s a director at Safari Publications, a magazine publishing house, and founder/editor-in- chief of Belle Weddings (Caribbean) magazine. Her debut novel The Yard (literary, romance) is published by Speaking Tiger Books in both paperback and ebook formats. She explores the ideas of breaking free from imposed boundaries (familial or otherwise), understanding and feeling supported in who you are, overcoming self-doubt, and finally being true to yourself. Her writing looks at strict religious ideologies and their potential consequences and begs for a softer approach and innate understanding and compassion towards every human being. She writes from the perspective of East Indians whose forefathers were brought to Trinidad from India through the British colonial indentureship scheme in 1845.
Posted by Lisa at 6:53 AM
Email ThisBlogThis!Share to TwitterShare to FacebookShare to Pinterest
Labels: book review, diversity, fiction, Trinidad