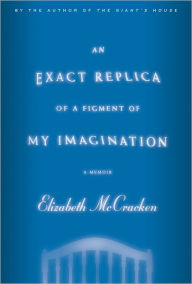 An Exact Replica Of A Figment Of My Imagination by Elizabeth McCracken
Published September 2008 by Little, Brown, and Company
Source: bought through Better World Books

Publisher's Summary:
A prize-winning, successful novelist in her 30s, McCracken was happy to be an itinerant writer and self-proclaimed spinster. But suddenly she fell in love, got married, and two years ago was living in a remote part of France, working on her novel, and waiting for the birth of her first child. This book is about what happened next.

In her ninth month of pregnancy, she learned that her baby boy had died. How do you deal with and recover from this kind of loss? Of course you don't--but you go on. And if you have ever experienced loss or love someone who has, the company of this remarkable book will help you go on.


My Thoughts:
I'm fairly certain that this book has been on my radar since I heard Maureen Corrigan review it on NPR shortly after it was published. It's a shame that it languished on the TBR list for so long; it might not have if it were still getting the kind of notice that other books about loss, such as Joan Didion's The Year of Magical Thinking, do. But maybe, sometimes, books fall into our hands at just the right time. For me, losing a child has always seemed like the worst thing that could possibly happen. What's going on in my life is not that. Other people are dealing with so much more.

"This is the happiest story in the world with the saddest ending," McCracken writes, early on in the book. That is after she wrote:


"A child dies in this book: a baby. A baby is stillborn. You don't have to tell me how sad that is: it happened to me and my husband, our baby, a son."

How can this possibly be the happiest story in the world, then, I wondered. McCracken's story does begin with a woman who had resigned herself to a happy life alone. No, that's not right. She hadn't resigned herself; she was perfectly fine with the idea that she would be, as she called it, a spinster. But then Edward came into her life, adding a new layer of happiness and they created a life that included time in Europe between teaching gigs in the U.S. In her late 30's, McCracken became pregnant while they were living in France; she was the poster child for happy, healthy pregnancies. She did everything right - she ate healthy, she kept active, she shopped around for the medical professionals she felt were best for her.

Then one day she realized that her baby, a son they had taken to calling Pudding because they didn't want to give him his name until he was born, had become very inactive. By the time they got to the hospital, it was too late. How do you get over that?


"...life goes on but that death goes on, too, that a person who is dead is a long, long story. You move on from it, but the death will never disappear from view. Your friends may say, Time heals all wounds. No, it doesn't, but eventually you'll feel better. You'll be yourself again. Your child will still be dead."

As with all grief, I'm sure the grief of losing a child, in particular a stillborn child, is unique to every person. McCracken is incredibly honest with her grief, from her own guilt, to the need to escape everything that reminded her of her son, to the ways in which the people surrounding her helped her through the worst of it (and, in some cases, the ways in which they made it so much worse).

As much as the book is about losing Pudding (because they had not decided on a name before he was born and couldn't bear to give him a name that would only be a death name, their son's birth and death is recorded in French paperwork was Pudding Harvey), it's about the ways in which that loss affected her second pregnancy. McCracken and her husband never gave the second baby a nickname, they didn't prepare a nursery, they went to multiple classes to make sure they were doing all of those things the right way but she didn't worry about what she ate the same way she had in her first pregnancy.

There is never a point in the book that doesn't feel sad but it is also filled with hope (McCracken became pregnant with her second child only three months after losing her first), and even humor. It is, simply, a beautiful book and it taught me so much about the way to help someone who is grieving. I don't know that I will ever be able to read it again (which is usually the criteria for me keeping a book); but, for now at least, I'm not ready to part with it. I think I'm going to want to revisit it.

Posted by Lisa at 1:30 AM
Email ThisBlogThis!Share to TwitterShare to FacebookShare to Pinterest
Labels: book review, memoir, nonfiction