Publisher's Summary:
Ella Minnow Pea is a girl living happily on the fictional island of Nollop off the coast of South Carolina. Nollop was named after Nevin Nollop, author of the immortal phrase containing all the letters of the alphabet, “The quick brown fox jumps over the lazy dog.”

Now Ella finds herself acting to save her friends, family, and fellow citizens from the encroaching totalitarianism of the island’s Council, which has banned the use of certain letters of the alphabet as they fall from a memorial statue of Nevin Nollop. As the letters progressively drop from the statue they also disappear from the novel.

My Thoughts:
It seems strange to me that this book was on my radar before I read Trish's (Love, Laughter and A Touch of Insanity) review in 2015. It came out quite a few years before I started blogging but yet I seem to recall being well aware of it when I read her review. It was, however, her review that convinced me that this was a book I would enjoy. So I bought it. Twice, apparently. I really do need to get an inventory of the books I own!

At any rate, Trish did not steer me wrong. Like her, sometimes an epistolary novel is just the thing; I especially find that so when I'm working my way through a reading slump. In Ella Minnow Pea, we are mostly privy to the letters to and from Ella as things begin to unravel on the island of Nollop. There's no much here in the way of character development, but that is more than made up for with the language acrobatics Dunn displays as a society of wordsmiths' options become increasingly smaller. 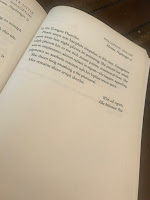 The letter writers are forced to get more and more creative in finding words (the days of the week had to be renamed, for example, once the letter D fell); eventually, it became like reading my kindergartners' journals, with phonetic spellings being the last resort. By the end, the letters had gotten quite short due to the lack of alphabet remaining but even harder to read!

Equally of interest was the view of a society collapsing as those in charge begin imposing restrictions and penalties on its citizens. It might be easy to avoid using a "z" in your writing, but imagine a grocer having to adjust to not being able to call twelve eggs a dozen or a nine-year-old not being able to zoom around. On Nollop, a first offense would have earned said grocer a verbal reprimand. After that, things got much more serious; a second offense would find the offender choosing between the stockades or a whipping and a third offense would get a person banished.

It's a small book, with a seemingly light premise, except that it isn't. Dunn has neighbors turning on neighbors, families broken apart, leaders who commandeer others' property for their own use and hoard food. Because of the epistolary nature of the book, none of that is right in our faces. But it's there to think about and seems pretty relevant these days.

Posted by Lisa at 1:30 AM
Email ThisBlogThis!Share to TwitterShare to FacebookShare to Pinterest
Labels: book review, epistolary, literary fiction