The Wife, The Maid, and The Mistress by Ariel Lawhon

The Wife, The Maid, And The Mistress by Ariel Lawhon
Published June 2014 by Gale Group
Source: my copy purchased for my Nook

One summer night in 1930, Judge Joseph Crater steps into a New York City cab and is never heard from again. Behind this great man are three women, each with her own tale to tell: Stella, his fashionable wife, the picture of propriety; Maria, their steadfast maid, indebted to the judge; and Ritzi, his showgirl mistress, willing to seize any chance to break out of the chorus line.


"What is it with you and graveyards?"
"They fascinate me."
"Dead people fascinate you?"
"No. The stories they leave behind." She peered up at him. "Don't you wonder who they
were? What kind of lives they lived?"

Lawhon is clearly fascinated by dead people and the kind of lives they lived. In The Wife, The Maid, And The Mistress, Lawhon takes a known details of a disappearance that made big headlines almost ninety years ago and crafts her own version of what might have happened and who might have been involved.

Filled with crooked politicians and cops, bootleggers,  society women and showgirls, Lawhon creates a cast of colorful characters to tell her story. Nearly all of them are liars. Most of them are hiding secrets. Some of them are real. Like Billie Holiday.


"Smoke hung love in the air, and smooth jazz rhythms vibrated through the dance floor, up her feet and thighs, and into her rib cage. It lured her with a serpentine motion, and she leaned into the music. For one brief second, Ritzi forgot her troubles in the seductive embrace of the singer's voice. Tall and waif like and clearly not out of her teens, the black woman had a voice so full of emotion that Ritzi gaped."

I came away from the book with a vivid picture of 1930 New York City, a city where, just a year after the market collapse, there were 700 new buildings being built, where speakeasies were frequented by the high and mighty, and where Tammany Hall ruled the day.

Lawhon builds her story by alternating the stories of the three women coming to a big surprise that is actually so quiet, it would be easy to miss it. It's a surprise that makes you want to reread the book to see what you missed. In retrospect, I feel like there may have been a bit too much going on in the book but at the time I was reading, I was all in for the ride and enjoyed the book a lot. Perhaps my very favorite part, though, was coming to this point: 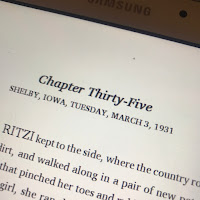 Shelby, Iowa. A very small town, about an hour east of Omaha, a speck on most maps and a town that, until a recent surge due to a manufacturing plant locating nearby, was slowing dying. It wouldn't mean anything to most readers. But it's the town that my mom grew up in, the town we went to visit my grandparents in for more than twenty years. What a surprise to find it in a book! It made me like Lawhon's book even more.