In This Ground by Beth Castrodale

In This Ground by Beth Castrodale
Published September 2018 by Garland Press
Source: my copy courtesy of the publisher through TLC Book Tours

Publisher's Summary:
Just as his indie-rock band was poised to make it big, Ben Dirjery traded it all in for fatherhood and the stability of a job at Bolster Hill Cemetery. Now closing in on fifty, the former guitarist finds himself divorced and at loose ends, and still haunted by the tragic death of his former band’s lead singer, who is buried, literally, under Ben’s feet. Then Ben’s daughter begins questioning a past he has tried to bury. If he can face her questions, he might finally put to rest his guilt over his bandmate’s death, and bring music back into his life.


My Thoughts:
When I agreed to read and review this book for the tour, it was based on this summary, a summary that almost exclusively focuses on the music aspect of the book. But I missed the shovel on the cover of the book and that is a better clue to what this book is about than the guitar that also appears. Music plays a big part in the book but death, and the way we deal with it, is the real story here.

There's a lot going on in this book: there are multiple music stories at play, Castrodale looks at the ways burials are changing, there are a lot of relationships Castrodale explores, a great deal about mushrooms, there's some mystery, and there's even a side story about death in India. It doesn't all work; there's just too much in too short a book and some of the side stories take away from the main story lines. For a while, I wasn't sure I was going to be able to finish the book; I was having such a hard time settling in to it. It was partly saved by the fact that I bailed on the last book I was to supposed to review by TLC Book Tours. But it was mostly saved by the fact that I started to really want to know what happened to Ben to cause him to give up on music. I started to want to find out how he was going to talk the cemetery board into approving green burials (let's be honest, this is the kind of book that you already know that he'll succeed, it's just a matter or how he's going to make that happen). And I started to care about Ben. I wanted to see if he could come to peace with his past, if he could succeed in his relationships.

Castrodale's history as a newspaper reporter comes into play in the pieces she inserts to introduce each chapter, often pieces that mimic newspaper clippings. I found it an interesting way to add a layer to the book and also to move the story along.

It's not a perfect book but it's an unusual book that makes you care about its characters and I'm looking forward to seeing what the future holds for Castrodale. For more reviews, check out the full tour. 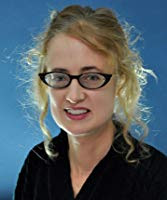 Beth Castrodale has worked as a newspaper reporter and editor. Her novels include Marion Hatley, a finalist for a Nilsen Prize for a First Novel from Southeast Missouri State University Press (published by Garland Press in 2017), and In This Ground (Garland Press, 2018). Beth’s stories have appeared in such journals as Printer’s Devil Review, The Writing Disorder, and the Mulberry Fork Review. Get a free copy of her novel Gold River when you sign up for her e-newsletter, at http://www.bethcastrodale.com/gold-river/.