The Lost Girls of Paris by Pam Jenoff

The Lost Girls of Paris by Pam Jenoff
Published January 2019 by Park Row
Source: my copy courtesy of the publisher, through TLC Book Tours, in exchange for an honest review

One morning while passing through Grand Central Terminal on her way to work, Grace Healey finds an abandoned suitcase tucked beneath a bench. Unable to resist her own curiosity, Grace opens the suitcase, where she discovers a dozen photographs—each of a different woman. In a moment of impulse, Grace takes the photographs and quickly leaves the station.

Grace soon learns that the suitcase belonged to a woman named Eleanor Trigg, leader of a network of female secret agents who were deployed out of London during the war. Twelve of these women were sent to Occupied Europe as couriers and radio operators to aid the resistance, but they never returned home, their fates a mystery. Setting out to learn the truth behind the women in the photographs, Grace finds herself drawn to a young mother turned agent named Marie, whose daring mission overseas reveals a remarkable story of friendship, valor and betrayal.


My Thoughts:
I have a confession to make (doesn't it seem like I have a lot of confessions to make when I sit down to write reviews?) - I may be one of the very few women in this country who did not read Jenoff's The Orphan Train, especially women who belong to book clubs. I imagine some day I'll get around to reading that one; but, in the meantime, when I was offered the chance to read this novel, I figured that was a good place to start with Jenoff.

And now here's another thing I often find myself saying in book reviews - this one proved to be the right book at the right time. History, mystery, women doing things we're not accustomed to women doing and interesting characters - it's all there, just when it was the kind of different book that I needed. If I'd have picked this one up at another time, I might have had more trouble with the times Jenoff demanded that I suspend disbelief. Or I might have had more trouble with the dual narrative that has become so common that it's become something that sort of turns me off on a book. But Jenoff does the dual narrative in a different way - her two tales are set only two years apart. This worked better for me because I found it much more likely that Grace would be able to find the information she needed than if she would have been searching for it 50 years later, even with the internet.

Of course, as soon as I finished this book, I had to get online and find out how much of the story was based on fact. I hadn't been aware for the SOE (the organization behind the operations in the book) before the book but assumed that was real. It was. It was also true that women were recruited as couriers and radio operators and Jenoff has even included some real people who were involved. You know how much more that endears a book to me! 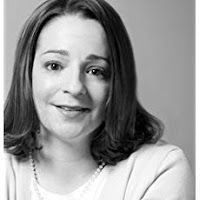 I can definitely recommend this book, like Jenoff's others, for book clubs. Thanks to the ladies of TLC  Book Tours for allowing me to discover Jenoff. For other opinions about the book, check out the full book tour. You can also find Instagram Features and Excerpts there.

Pam Jenoff is the author of several novels, including the international bestseller The Kommandant’s Girl, which also earned her a Quill Award nomination. Pam lives with her husband and three children near Philadelphia where, in addition to writing, she teaches law school.