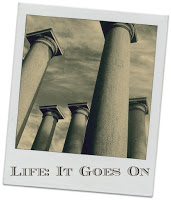 Remember last Sunday when I said there was not much on the calendar for the week? That didn't last, which is pretty much the norm these days.  That's probably ok; this homebody might never leave the house except to go to work if she had her way! 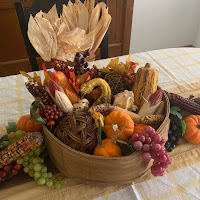 Today my house is a bit chaotic. With Thanksgiving being so late this year and next weekend so busy, I'm starting to bring up the Christmas decorations this weekend. Except I just cannot bring myself to take down all of the Thanksgiving/fall decor until after Thanksgiving, even though we're not hosting. I have so many mini-pumpkins that are still perfectly good and I'm feeling pretty guilty about just throwing them away. Does anyone know if squirrels would eat them if I toss them outside under the pine trees?

Listened To: Colson Whitehead's The Nickel Boys. So good and so heartbreaking. I started Casey Cep's Furious Hours but I'm not far enough into that one to have formed an opinion. It's due back in a few days so I'm going to have to turn it on as I work around the house today.

Watched: Sports, sports, and more sports including going to another college basketball game on Friday night with the Big Guy. We're pretty darn excited that our Bluejays scored enough points to earn us more free pizza this week!

Read: I read Miriam Toew's Women Talking and I was surprised by how much it made me think. I started Maureen Stanton's Body Leaping Backward on Friday and I'm so connected to this book so far.

Made: Was I even in the kitchen last week? We ate out Tuesday, Friday, Saturday, and Thursday we packed sandwiches to eat in the car on a road trip. Maybe this week I'll cook? 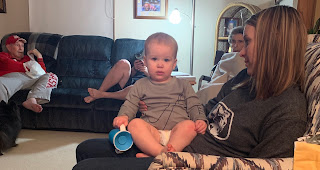 Enjoyed: Getting to play with this guy last night. The Prince, his parents, and his grandparents were at my parents last night so we went in to Lincoln and enjoyed pizza, conversation, and being entertained by a 16-month-old.

Planning: On getting the house decorated for Christmas this week. Although it will probably be next Sunday before I get it finished since this week will be busy with Thanksgiving and family time.

Thinking About: My son's mother-in-law, who I also consider to be a friend. I was hoping to get her here for Christmas but, because of some health issues, she won't be able to come. She's fine now but doesn't have time off work to come. I was so hoping to see her!

Feeling: Sad for my sister-in-law's family who lost their matriarch on Monday. She was 90 and ready to be reunited with her beloved husband but we are never ready to lose our mothers.

Looking forward to: Being with family this week!

Question of the week: What's your favorite Thanksgiving food?


Posted by Lisa at 10:39 AM
Email ThisBlogThis!Share to TwitterShare to FacebookShare to Pinterest
Labels: Life: It Goes On