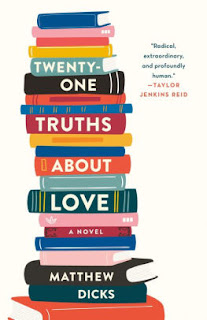 Twenty-one Truths About Love by Matthew Dicks
Published November 2019 by St. Martin’s Publishing Group
Source: my copy courtesy of the publisher, through Netgalley, in exchange for an honest review

Publisher’s Summary:
Daniel Mayrock's life is at a crossroads. He knows the following to be true:
1. He loves his wife Jill... more than anything.
2. He only regrets quitting his job and opening a bookshop a little (maybe more than a little)
3. Jill is ready to have a baby.
4. The bookshop isn’t doing well. Financial crisis is imminent. Dan doesn't know how to fix it.
5. Dan hasn’t told Jill about their financial trouble.
6. Then Jill gets pregnant.
This heartfelt story is about the lengths one man will go to and the risks he will take to save his family. But Dan doesn’t just want to save his failing bookstore and his family’s finances:
1. Dan wants to do something special.
2. He’s a man who is tired of feeling ordinary.
3. He’s sick of feeling like a failure.
4. He doesn't want to live in the shadow of his wife’s deceased first husband.

Dan is also an obsessive list maker; his story unfolds entirely in his lists, which are brimming with Dan’s hilarious sense of humor, unique world-view, and deeply personal thoughts. When read in full, his lists paint a picture of a man struggling to be a man, a man who has reached a point where he’s willing to do anything for the love (and soon-to-be new love) of his life.

My Thoughts:
A book with books on the cover has to be good, right? And Taylor Jenkins-Reid (Daisy Jones and The Six) had endorsed it. I mean, she’s just published a creatively written book so she should know one when she sees one. But you’re probably saying to yourself, “how in the world can a book written entirely in lists be interesting or have any depth?” I thought the same thing going in but I figured that a book written entirely in lists wouldn’t take long to read so it wasn’t a major commitment to give it a shot.

Guys, if I had started this book on a Friday night, I might well have stayed up all night reading it. Because, yes, in the same way that an epistolary novel sucks me in thinking I’ll just read one more letter, I kept thinking, “I’ll just read one more list.” Or one more day. Or one more month. And it’s only lists so there aren’t that many words on each page, so that helps. Still, I would have stayed up reading this book all night because I really, really liked this book. It is unique and funny and insightful and surprisingly moving.

The book is broken into monthly sections and then by the day and time each list was written. It was important to pay attention to those dates and times to really see how Dan's mind was working - sometimes there were a string of lists separated only by a few minutes. Essentially this book is the very easiest stream of consciousness book to read (and possibly the best way to write one that people will happily read). I became very attached to Dan - I so wanted him to be a good man. I won't give away the ending. Let's just say, it worked for me in all of the right ways.


Posted by Lisa at 1:30 AM
Email ThisBlogThis!Share to TwitterShare to FacebookShare to Pinterest
Labels: book review, humor, literary fiction