The Trial of Lizzie Borden by Cara Robertson

The Trial of Lizzie Borden by Cara Robertson
Read by Amanda Carlin
Published March 2019 by Simon and Schuster
Source: audiobook checked out from my local library

Publisher’s Summary:
When Andrew and Abby Borden were brutally hacked to death in Fall River, Massachusetts, in August 1892, the arrest of the couple’s younger daughter Lizzie turned the case into international news and her murder trial into a spectacle unparalleled in American history. Reporters flocked to the scene. Well-known columnists took up conspicuous seats in the courtroom. The defendant was relentlessly scrutinized for signs of guilt or innocence. Everyone—rich and poor, suffragists and social conservatives, legal scholars and laypeople—had an opinion about Lizzie Borden’s guilt or innocence. Was she a cold-blooded murderess or an unjustly persecuted lady? Did she or didn’t she?  An essential piece of American mythology, the popular fascination with the Borden murders has endured for more than one hundred years. Told and retold in every conceivable genre, the murders have secured a place in the American pantheon of mythic horror. Based on transcripts of the Borden legal proceedings, contemporary newspaper accounts, unpublished local accounts, and recently unearthed letters from Lizzie herself, The Trial of Lizzie Borden is [a book] that offers a window into America in the Gilded Age.

Lizzie Borden took an ax,
Gave her mother forty whacks.
When she saw what she had done,
She gave her father forty-one.

Why ever in the world an elementary-school girl in the 1960’s would have grown up knowing this ditty? Was it a rhyme we used when jumping rope? How gruesome is that for preteens? Then in1975, I watched a made-for-t.v. movie about the killings, starring Elizabeth Montgomery (of Bewitched fame) and the story has stuck with me ever since then. Yet, for some reason I had never picked up a book about the murders. So when I came across this book on my library’s website, I knew it was time to remedy that situation. 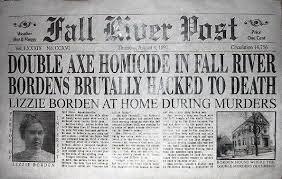 Cara Robertson is a lawyer (she clerked for the U. S. Supreme Court) who has been researching the Borden case since 1990. She’s done an impressive job of pulling together the research and facts of this case. Moreover, she’s managed to put it all out there for the reader without pointing the reader in one direction or another. And she’s managed to do share her research in a way that brings the case to life: the image of the jurors miserably being shuttled about, the oppressive heat in the courtroom, the little bouquets of flowers Lizzie held each day, the sartorial splendor of the esteemed counsels, the claustrophobia of the Borden household, and clamor to be a part of the proceedings.

Robertson lays out the cases of both the defense and the prosecution, both their strengths and their weaknesses. She explores the ways that class, gender, and ethnicity impacted the investigation and the trial. In exploring this trial so thoroughly, Robertson also points out the difficulties in all trials – contradicting witnesses and experts, society’s expectations of how a defendant “should” behave, allowable evidence, bias, egos, the role of the media, and all of the ways the investigation can be compromised.

While Kirkus Reviews says Robertson “manages to avoid the tedious repetitiveness inherent in a trial,” I did find that the book occasionally repetitive. This might have been because it sometimes felt like Robertson was trying to pack in every bit of information she had discovered in her research. And while Amanda Carlin does a fine job reading the book, I did wish that I had read this in print so I could refer back to some passages. Nothing I can see says that the book includes maps or lists of the players, but I think that would have been helpful.

I know you’re all wondering if Lizzie really did take an ax and murder her father and stepmother. Armed with all of the facts, I can’t see who else could have done it or why. But because of the sloppy police work and the questions raised by the defense, I doubt I could have voted to convict Lizzie Borden.