The Dutch House by Ann Patchett 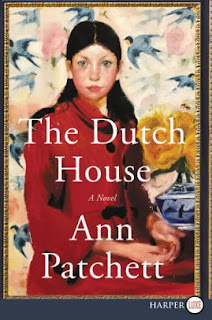 The Dutch House by Ann Patchett
Published September 2019 by HarperCollins Publishers
Source: checked out from my local library

Publisher’s Summary:
At the end of the Second World War, Cyril Conroy combines luck and a single canny investment to begin an enormous real estate empire, propelling his family from poverty to enormous wealth. His first order of business is to buy the Dutch House, a lavish estate in the suburbs outside of Philadelphia. Meant as a surprise for his wife, the house sets in motion the undoing of everyone he loves.
The story is told by Cyril’s son Danny, as he and his older sister, the brilliantly acerbic and self-assured Maeve, are exiled from the house where they grew up by their stepmother. The two wealthy siblings are thrown back into the poverty their parents had escaped from and find that all they have to count on is one another. It is this unshakeable bond between them that both saves their lives and thwarts their futures.
Set over the course of five decades, The Dutch House is a dark fairy tale about two smart people who cannot overcome their past. Despite every outward sign of success, Danny and Maeve are only truly comfortable when they’re together. Throughout their lives they return to the well-worn story of what they’ve lost with humor and rage. But when at last they’re forced to confront the people who left them behind, the relationship between an indulged brother and his ever-protective sister is finally tested.

My Thoughts:
If you asked me when I read Patchett’s Bel Canto, I would probably give you a date a decade earlier than I actually read it. It seems like it has been on my list of all-time favorite books for as long as I can remember, but it was only 2005. I am terrified to reread it for fear it will not hold up to my memory of it. So for the past 14 years (evidently only 14 years), I’ve been reading as much Patchett as I can get my hands on, trying to find the book that can live up to Bel Canto. Not a single book Patchett has written has been a disappointment. But none of them made me feel the same way Bel Canto did. The Dutch House is pretty damn close. I loved this book. It will undoubtedly be on my list of favorite books for 2019.

Did you see those two little words in that summary “fairy tale?” I hadn’t read the summary before I read the book (because Ann Patchett’s name on the book was enough to convince me to read it) but you don’t need to go into the book looking for the fairy tale elements. Mother gone? Check. Wicked stepmother? Check. Ominous passages? Check. House that draws the children to it? Check. Just like most fairy tales, there’s no real moral to this story. That’s not to say there are no lessons to be learned.

A reviewer on NPR felt this was a misstep on Patchett’s part to have Danny narrate the story, that the story should have been told from Mauve’s point of view (as she was the more interesting character) or by an omniscient narrator. But I disagree. Danny was not alive when Cyril bought the Dutch House. Because of that, we are allowed to learn the history of how the house came to belong to the Conroy’s and because he was so young when his mother left, it’s up to other people to tell Danny, and the reader, what really happened, as they knew it. Neither an omniscient narrator nor Mauve as narrator would have allowed Patchett to slowly reveal the various points of view of the past in the way she did. It is one of the things I most enjoyed; that’s how life works.

Patchett has a marvelous way of weaving the story back and forth in time so that while the story moves forward, it never loses sight of the past. She makes you care so deeply about these characters, particularly Danny and Mauve. This could have been melodramatic in a lessor author's hands, but Patchett never stoops to that. The Dutch House is a story about family and forgiveness and about having a place to call home.

Posted by Lisa at 1:30 AM
Email ThisBlogThis!Share to TwitterShare to FacebookShare to Pinterest
Labels: book review, family, literary fiction