The Lost Books of Jane Austen by Janine Barchas 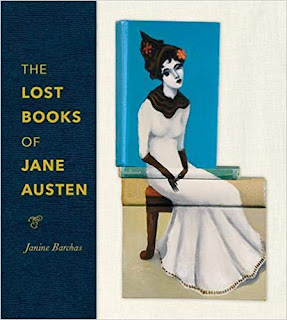 The Lost Books of Jane Austen by Janine Barchas
Published October 2019 by Johns Hopkins University Press
Source: my copy courtesy of the publisher, through TLC Book Tours, in exchange for an honest review

Publisher’s Summary:
In the nineteenth century, inexpensive editions of Jane Austen's novels targeted to Britain's working classes were sold at railway stations, traded for soap wrappers, and awarded as school prizes. At just pennies a copy, these reprints were some of the earliest mass-market paperbacks, with Austen's beloved stories squeezed into tight columns on thin, cheap paper. Few of these hard-lived bargain books survive, yet they made a substantial difference to Austen's early readership. These were the books bought and read by ordinary people.
Packed with nearly 100 full-color photographs of dazzling, sometimes gaudy, sometimes tasteless covers, The Lost Books of Jane Austen is a unique history of these rare and forgotten Austen volumes. Such shoddy editions, Janine Barchas argues, were instrumental in bringing Austen's work and reputation before the general public. Only by examining them can we grasp the chaotic range of Austen's popular reach among working-class readers.
Informed by the author's years of unconventional book hunting, The Lost Books of Jane Austen will surprise even the most ardent Janeite with glimpses of scruffy survivors that challenge the prevailing story of the author's steady and genteel rise. Thoroughly innovative and occasionally irreverent, this book will appeal in equal measure to book historians, Austen fans, and scholars of literary celebrity.

My Thoughts:
You all know that I didn’t even hesitate, when I was offered this book for review, to squeeze in another book this month when it was about Jane Austen. You may have even heard me squeal a little bit when it arrived in the mail. It’s really a beautiful book, inside and out. I love the cover!

Not only is this a beautiful book, it’s an extremely well-researched piece of academic work. Which is also to say that this is not a quick read; it is a detailed exploration of the way that innovations in book printing and marketing gave rise to Austen’s enormous popularity. Books went from being the possessions of strictly the wealthy to being something even those with the lowliest of incomes could afford. The working class was soon able to afford to keep small libraries thanks to publishers such as George Routledge, including the copies sold in railway stations (think paperbacks sold in the airport gift shops). Because these books were not made as well nor prized by collectors, they are, in many ways, rarer than first editions.

I found it interesting that Lever Brothers and Pear soap manufacturers used copies of the books as prizes. I’m certain that if my readers were offered the chance to earn books as a prize just for buying soap, you’d jump at the chance. But can you imagine readers more than one hundred years ago thinking that a cheap copy of a book was preferable to other prizes they might choose? It goes to show how highly books were prized then, even if they were cheaply made copies.

Between each chapter, Barchas has included the story of the provenance of a particular physical book which especially intrigued me. With each of these books, using the information regarding the reprint and the signature in the book, Barchas was able to find the owner using census records allowing us to get a fuller picture of the kinds of people who might have owned and read Austen’s stories.

I’m pretty impressed that Barchas took up the common man and the lesser copies of Austen’s books as a research project, especially given the considerable number of years she devoted to the project. I’ll admit that I haven’t had time to give this book the deep reading it deserves but that’s ok – it’ll be sitting on my coffee table, ready for me to pick up and read more thoroughly as time permits. Barchas didn’t rush her research and I don’t want to rush through her work. Although, I have to admit that I’ve got a problem with Henry James and Mark Twain after reading what they had to say about Austen. I’m not sure how many more insults to my fave author I can take!

Thanks to the ladies of TLC Book Tours for including me on this tour. For other reviews, check out the full tour.

Janine Barchas is the Louann and Larry Temple Centennial Professor of English Literature at the University of Texas at Austin. She is the author of Matters of Fact in Jane Austen: History, Location, and Celebrity and Graphic Design, Print Culture, and the Eighteenth-Century Novel. She is also the creator behind What Jane Saw (www.whatjanesaw.org).

To purchase your own copy of this book, you can order directly from Johns Hopkins University Press.
Posted by Lisa at 6:39 PM
Email ThisBlogThis!Share to TwitterShare to FacebookShare to Pinterest
Labels: book review, books about books, Jane Austen, nonfiction, TLC Book Tours