The Grammarians by Cathleen Schine 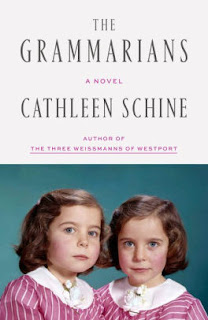 The Grammarians by Cathleen Schine
Published September 2019
Source: checked out from my local library

Publisher’s Summary:
The Grammarians are Laurel and Daphne Wolfe, identical, inseparable redheaded twins who share an obsession with words. They speak a secret “twin” tongue of their own as toddlers; as adults making their way in 1980s Manhattan, their verbal infatuation continues, but this love, which has always bound them together, begins instead to push them apart. Daphne, copy editor and grammar columnist, devotes herself to preserving the dignity and elegance of Standard English. Laurel, who gives up teaching kindergarten to write poetry, is drawn, instead, to the polymorphous, chameleon nature of the written and spoken word. Their fraying twinship finally shreds completely when the sisters go to war, absurdly but passionately, over custody of their most prized family heirloom: Merriam Webster’s New International Dictionary, Second Edition.

My Thoughts:
When I was in grade school, there were three sets of twins in my grade, one was a set of identical boys, two sets were fraternal twins. I never gave the idea of twins much thought. Because there is a lot of twinning going on in my book club, it comes up a lot in our meetings and it's gotten me thinking about what it's like to be a twin. Just how does growing up your whole life with someone who looks exactly like you feel? And how deeply does the indentical-ness go?

But, let's be honest, the real reason I picked up this book (besides the fact that it was by Schine), was because it was about language. I do so love to geek out on words and language and I really wanted to see how Schine was going to be able to write a novel about language that might interest a wider audience. A word of warning for those who aren't language geeks – there really is a lot of discussion of language in this book and it does play a fairly significant role in the story so you can’t just rush by it. But the book's appeal is not limited.

In The Grammarians, Laurel and Daphne are so alike that it’s not just difficult to tell them apart physically, they also have the same passion for language that molds their identities and initially unites them against all others. They develop their own language, they make lists of their favorite obscure words, they both find themselves in careers that are based on language. But as much as the twins dote on each other and cherish the fact that they have someone who will always know them better than anyone else, they are also keenly aware of their differences. Their lives become a struggle between the need to create their own identities and that bond that will never break. When the twins switch jobs for a day, both believe that they have been a better version of the other one. When Laurel gets a nose job, Daphne takes it as a personal slight. When their mother complains to each of them about the other twin, the girls are quick to defend each other. And yet they will grow to have very little to do with each other and it takes a toll on the rest of the family.

While this is not my favorite Schine book (that honor goes to The Three Weissmanns of Westport), I very much enjoyed it. Schine always writes compelling family stories with humor, intelligence, and a great fondness for her characters.