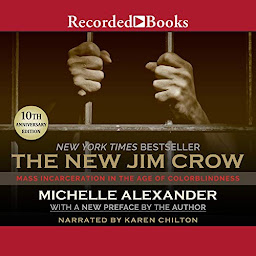 The New Jim Crow: Mass Incarceration in the Age of Colorblindness by Michelle Alexander
Read by Karen Chilton
Published 2010
Source: audiobook checked out from my local library
Publisher’s Summary:
Seldom does a book have the impact of Michelle Alexander’s The New Jim Crow. Since it was first published in 2010, it has been cited in judicial decisions and has been adopted in campus-wide and community-wide reads; it helped inspire the creation of the Marshall Project and the new $100 million Art for Justice Fund; it has been the winner of numerous prizes, including the prestigious NAACP Image Award; and it has spent nearly 250 weeks on the New York Times bestseller list.
Most important of all, it has spawned a whole generation of criminal justice reform activists and organizations motivated by Michelle Alexander’s unforgettable argument that “we have not ended racial caste in America; we have merely redesigned it.” As the Birmingham News proclaimed, it is “undoubtedly the most important book published in this century about the U.S.”
Now, ten years after it was first published, The New Press is proud to issue a tenth-anniversary edition with a new preface by Michelle Alexander that discusses the impact the book has had and the state of the criminal justice reform movement today.
My Thoughts:
I have read books that have made me smile, made me laugh, even made me ugly cry, but it’s not often that a book has made me angry. In fact, it’s only happened once before, a month or so ago when I read Just Mercy. This book made me angry. So angry. Which is only made worse by the fact that this book was written ten years ago and the situation has not changed at all. To say that it is eye opening is an understatement. I took ten pages of notes as I listened. If I’d been reading my own print copy, highlighter in hand, there might well have been more I’d want to have noted.
I’ve gone back and forth on this review. Nonfiction is always tough because I don’t necessarily want to get too much into the facts presented in the book; the goal is to focus more on the way the book is written. Is it well written? Is it well researched? Is it engaging? Does the author back up his/her assertions? Did it answer questions and, hopefully, raise others? Does the author have the credentials to be taken seriously? When it comes to The New Jim Crow, for me the answer to all of these questions is a resounding “yes!”
Alexander is a civil rights litigator and legal scholar; she knows her subject and has clearly done the research, to say nothing of having lived the subject. She asserts that mass incarceration is the most recent of the systems white Americans have used to exert racialized social control, a “racial caste system.” Alexander explores the history of slavery (the first system), Jim Crow laws of the 19th- and 20th-centuries(the second system), and, finally, the policies that, Alexander contends, will result in one in three young black men being imprisoned if trends continue.

"Race plays a major role—indeed, a defining role—in the current system, but not because of what is commonly understood as old-fashioned, hostile bigotry. This system of control depends far more on racial indifference (defined as a lack of compassion and caring about race and racial groups) than racial hostility – a feature it actually shares with its predecessors.”

This latest form of racial caste system most notably began when President Ronald Reagan began the war on drugs, a “war” begun when crime was on the downward trend and primarily targeted at minority communities. How can Alexander be sure of that, you may ask. Well, the so-called war’s primary public relations target was crack cocaine, which was mainly found in urban, minority areas. Powder cocaine, which was no less potent or dangerous was primarily found in suburban, white communities. To convince local law enforcement sign onto their war, the administration began offering them surplus military equipment and cash incentives (the more people you arrest, the more money you get). Those practices continue to this day. Here’s the kicker – there is no evidence that drug use or trafficking is higher among persons of color than whites; but, according to Alexander, by far and away more persons of color than whites are stopped on the street, pulled over, or have their homes searched.
If I hadn’t read enough information from other sources to know that Alexander is speaking fact, I would hardly be able to believe what I’d read. And if you don’t think this really affects you, think again. There is a tremendous cost to society to have all of these mostly young, black and Hispanic men arrested. There is the cost of the judicial process, the cost to imprison them, and then the cost to society to care for the families they may have left behind without a means of support and the families they will have once they leave prison and can’t get a job because of their felony record. Think this only happens to big dealers? That’s not true either. The vast majority of people imprisoned for drug offenses are imprisoned for relatively low quantities but will be punished the rest of their lives for a having a little weed on them.
What’s more, the judicial system has wiped out many of our rights (primarily in regard to the Fourth Amendment) in their effort to justify police actions. That means you can be pulled over for the slightest reason and your vehicle can be searched based merely on the officer saying he/she say something suspicious. What’s more, they can seize your property and they don’t have to give it back…even if you are never convicted of a crime. So yep, I’m angry on behalf of the way our country has treated persons of color and the way our judicial system has made a mockery of our rights. Back off my soap box (although if you follow me on Facebook or Instagram, you’ll find me up there a lot).
The point is, this is an extremely important book that everyone should read. The better informed you are, the better able you will be to be an ally if you so choose and to make choices in elections. It’s fascinating history. I only wish that was all it was.
Posted by Lisa at 9:16 PM
Email ThisBlogThis!Share to TwitterShare to FacebookShare to Pinterest
Labels: audiobook, book review, diversity, library, nonfiction, racism