Happy Sunday! I hope you all found some way to celebrate Thanksgiving this past week that was safe and worked for your family to still be able to feel some connection. The Big Guy and Mini-him went to my parents' for a few hours. We ate in separate rooms, spent part of the day on the front porch in our coats, and Mini-him, who travels, even ate his meal on the deck just to be safer. It was far from our usual orchestrated chaos of 20 people crowded around the tables but we had most of the favorite foods, the guys did the annual field goal kicking, and, most importantly, my parents were not alone.

Now here I am on day four of a four-day weekend and I'm trying to muster up the energy to start the Christmas decorating. Maybe it's not a matter of energy so much as it's a matter of "why bother," as Miss H keeps asking me. But this year is terrible enough as it is; I can't bear to think of making it even more unusual. So I'll spend some more time before Miss H leaves for home and then I'll shoot to finish at least one room today. Maybe that will put me in the mood.

Last Week I:
Listened To: Still listening to Yaa Gyasi's Transcendent Kingdom. I'm finding that it is not a book that I can listen to when I'm not fully focused so I can't really listen to it while I'm working. I'll probably finish it up tomorrow. I don't have anything else coming up soon, book-wise, so then I'll turn to podcasts. 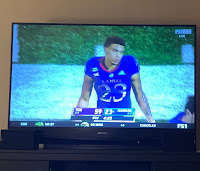 Watched: Our great-nephew is a freshman on the football team at Kansas University. Last night he got his first start and it was so exciting to not only get to watch him play at that level but to get to see him have a great game and to hear the announcers raving about him. Looking forward to watching him play a lot more!
Read: I have so many book due back to the library or that will expire on Netgalley this week and no interest whatsoever in actually picking up a book and reading it. I hardly picked up a book at all last week.
Made: Thanksgiving dinner...twice. We took in ham, mashed potatoes, sweet potatoes, and cranberries to my parents then I made all of that all over again for the kids on Saturday plus cornbread casserole and pie.
Enjoyed: Family, even if it some of that time together had to be by Zoom.
This Week I’m:
Planning: On getting the decorating done, getting Mini-me's and Ms. S's gift shopping finished and the gifts shipped, and starting some crafting.
Thinking About: My sister and brother-in-law who, despite being extremely cautious for months because of my brother-in-law's health, caught CoVid last weekend just as they arrived at their new home. It's been a scary week for those of us who love them. It looks like they will be fine...eventually; but they have been miserable for a week. They have never been far from my thoughts this week.
Feeling: Frustrated that so many still don't take this virus seriously. Mini-him was traveling last week with a co-worker who had left for their trip knowing his wife was sick (to be fair, she was not diagnosed with CoVid until two days after they left but you have to assume CoVid these days if someone is sick, especially if you have just returned from a trip to Mexico with a group of friends). It's the second time in two weeks a co-worker has put Mini-him at risk. Mama Bear is not happy about that!
Looking forward to: Trying my hand at some new crafts this week and retrying a craft I haven't done in 45 years. I'd tell you about it but then I'd have to admit if it's a complete failure!
Question of the week: Do you make any of your gifts for the holidays?
Posted by Lisa at 1:32 PM
Email ThisBlogThis!Share to TwitterShare to FacebookShare to Pinterest
Labels: Life: It Goes On