Stories From Suffragette City edited by M. J. Rose and Fiona Davis
Published October 2020 by Holt, Henry, and Company, Inc.
Source: checked out from my local library
Publisher's Summary:
Stories from Suffragette City is a collection of short stories that all take place on a single day: October 23, 1915. It’s the day when tens of thousands of women marched up Fifth Avenue, demanding the right to vote in New York City. Thirteen of today's bestselling authors have taken this moment as inspiration to raise the voices of history and breathe fresh life into their struggles and triumphs.
The characters depicted here, some well-known, others unfamiliar, each inspire and reinvigorate the power of democracy. We follow a young woman who is swept up in the protests when all she expected was to come sell her apples in the city. We see Alva Vanderbilt as her white-gloved sensibility is transformed over the course of the single fateful day. Ida B. Wells battles for racial justice in the women's suffrage movement so that every woman's voice can be heard. Each story stands on its own, but together Stories From Suffragette City becomes a symphony, painting a portrait of a country looking for a fight and ever restless for progress and equality. 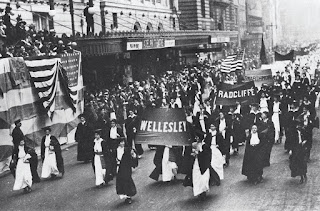 My Thoughts:
One hundred and five years ago more than 25,000 women marched through New York City calling for the vote for women. Five years later, white women finally won that right. This collection celebrates that victory by using that march as its theme. Some of the stories center around real women, some of them quite well known in the movement; most are about fictional women and girls caught up in the movement.
As with all short story collections, some of the stories resonated with me more than others. Perhaps the weakest of the stories, for me, was Steve Berry's Deeds, Not Words, primarily because it tells the story of a man peripherally involved with the march. Many of the stories are told from the perspective of immigrants. I particularly was impressed with Chris Bohjalian's Just Politics which is the story of a young Armenian refugee who has been convinced to walk in the march but who can't shake a sense of impending doom because of what happened to her people in Adana, Turkey. All of the stories are told from the perspective of white women except Jamie Ford's Boundless, We Ride and Dolen Perkins-Valdez' American Womanhood are told from the perspective of women of color which are both strong stories. Perkins-Valdez' story is especially interesting because it focuses attention on the violence of the 1913 march in Washington D.C. and the betrayal of the black women who had worked so tirelessly to advance women's rights by white women. It's primary character is Ida Wells-Barnett, an investigative journalist and activist in the civil rights movement. She's certainly a woman I'd like to learn more about. 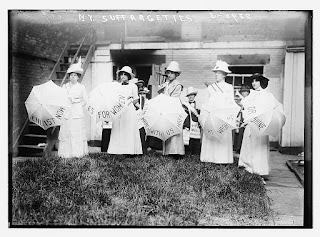 I don't know, of course, what parameters each author was given for the stories they wrote. There must have been some direction as to which point in the march the author's characters would become present, because the stories seem to be in a type of chronological order for the day. There may also have been a suggestion that a certain young girl named Grace, introduced in M. J. Rose's story, be incorporated as she appeared in several of the stories.  Where she did appear, it felt as a piece of the story that was fitted in just as a device to tie the stories together because it didn't really advance any of the other stories. Yet, once I'd become accustomed to her appearance, it felt odd when she didn't appear. For my part, I would have preferred she be left out of all but Rose's story.
As a reminder of all of the women who worked so hard and risked so much to earn women (well, at least white women) the vote, I definitely recommend this book. It will almost certainly make readers want to learn more about the movement. Fans of the authors included will not be disappointed.
Posted by Lisa at 1:30 AM
Email ThisBlogThis!Share to TwitterShare to FacebookShare to Pinterest
Labels: based on reality, book review, library, short stories